Flood Washes Out Tens of Thousands of Books 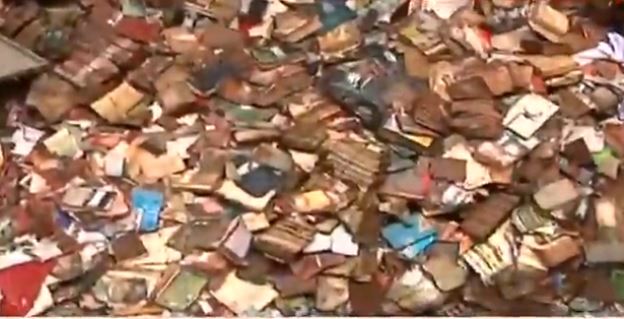 Water soaked books strewn on the floor of the Sangli Library.

We have occasional stories of destruction of libraries caused by the elements in the West, but this one from India tells of destruction on an enormous scale. Some 60,000-90,000 books have been destroyed or badly damaged in the Sangli Library. Sangli is located in the Western Indian state of Maharashtra. The capital city of Maharashtra is the better known Mumbai (Bombay), a metropolis of over 12 million people. Sangli may seem small in comparison, but it, too, is a substantial city, population over 650,000.

Sangli is located in a rather dry climate area, but it does have a monsoon season, and the monsoons can be devastating in India. It is currently the monsoon season. Sangli is also situated along the banks of the Krishna River. The Krishna is a major river, over 800 miles long, draining an area of some 100,000 square miles. A lot of water flows down it, even when it is not in flood stage. It's importance is immense, as it irrigates farms throughout the territory. It is usually a good friend.

Not this time. The Krishna has flooded before. In 2005, its waters rose to just outside the library's gates, but it did not come in. This time it came crashing through, causing damage unseen in the library's 150-year history. Water rose to six feet on the library's first floor. It didn't just soak the books and depart. The flood waters hung around for over a week. Books remained submerged in the river's waters for eight days.

News accounts speak of the books as having turned to "pulp." The library not only housed books, but many irreplaceable manuscripts. This includes many manuscripts and books that are very old and rare and of historic importance. Books are in both local languages and English, these going back to English colonial times.

Once the waters finally receded, citizens came to the library to see the damage and offer whatever assistance they could. For many of these books and manuscripts, there isn't much that can be done. Books were spread out on the floor and fans turned on to dry them out. Some people took books home to dry them as the library lacks sufficient floor space for all. Anyone who has dealt with waterlogged books will know this is a near impossible task. Even the most skilled conservation and restoration techniques are challenged by this, and there are far too many books for this sort of work. It is hoped that some of the one-of-a-kind books and manuscripts can somehow be salvaged, perhaps enough to create digital copies so their words will not be lost forever.