The Murder of Richard Jennings 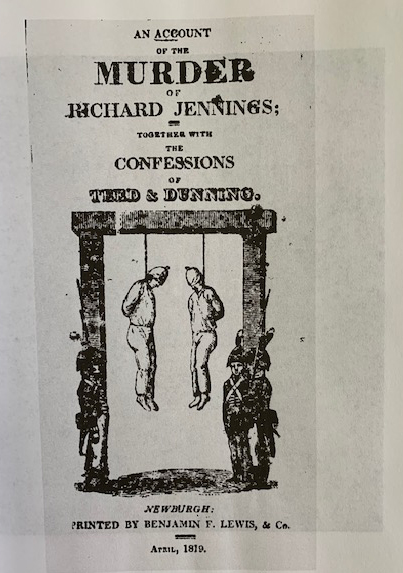 Recently I bought a copy of “An Account of the Murder of Richard Jennings; Together with the Confessions of Teed & Dunning.”  It details the story of a murder and later the execution of two men in Orange County, New York in 1819.  The pamphlet is interesting and substantially improved when a recent book, The Murder of Richard Jennings by Michael J. Worden is read concurrently.  It adds details to what is a somewhat sketchy story.

As is to be expected Thomas McDade’s bibliography of books and pamphlets on American Murders before 1900 “The Annals of Murder” captures the publishing history of the crime.

He lists several works, An account of the murder of Richard Jennings;… as well as Report of the trials of the murderers of Jennings,…

The story goes this way.  A gentleman in his seventies married to a younger woman who apparently grew tired of him and his imperfect ways, encouraged several men to end his life.  It was a pathetic crime, lubricated with liquor and promises of ready money.   The only thing lacking was a plan which led to the body being easily discovered and the murderers apprehended.

In this story of naves the hero is a black man who is involved in the murder but who later testifies against his white accomplices.  For his testimony he goes free and two of the white men are hung.  Another, with connections, is freed.  And the woman who encouraged the murder, she is released as she only encouraged the crime, she did not do it herself.  And of course, she was of the fairer sex.

The facts of the case seem confirmed in the early accounts if we can rely on the various concurrent accounts but they all seem mired in exaggeration and hyperbole.  At a glance, the problem seems to be the benefit to sales achieved when the details become lurid.  One can almost sense the proofs in galley form being criticized for “nobody is going to read this” and “we can sell another thousand copies if there is a little more drama.”  So the accounts have been dramatized.  Among the details publicized, it was said in one account that 15,000 people attended the hangings.  The county, Orange, had a population of 41,213 in 1820 but the roads were poor and forms of transport limited.  Neither were there accommodations for those who travelled a distance.  The largest city in the county was Newburgh, 20 miles away, and it’s population 5,812 in 1820.  And then there is the question:  who wants to watch two hangings?

That of course is not to say the contemporary pamphlet is not collectible.  It is but I’d put it in the historical fiction category.

I also have a first person account of the trial and sentencing of a slave to be burned at the stake  in Ulster County in 1730 and it’s far more real with many of the jurors and bystanders who signed the verdict, also voting to burn the slave alive.  The accounts of the 1819 murder seem almost poetic by comparison.

Most interesting, the two men who would die for their crime, in their published statements seem unconcerned that others, who were apparently more guilty, will live on while they will come morning, swing.  Somewhere in the story telling the truth and the story go off in different directions but it’s still something interesting to own.