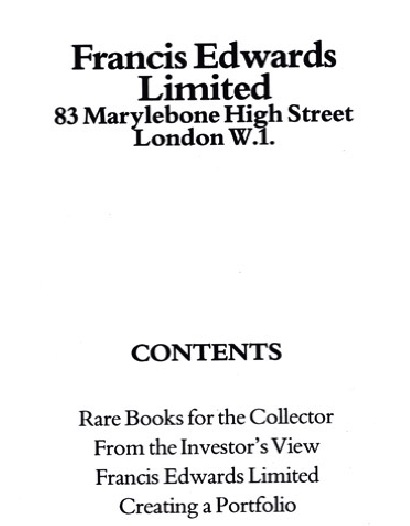 Books are purchased primarily for two reasons, reading and collecting. While the first purpose is the main reason they are published in the first place, it is generally a one-time shot. Read it once and its usefulness has been depleted. However, collecting has a permanence. It gives books a long term, and likely increasing, value. And once something has these attributes, a third purpose raises its head: investing. Most people who collect books for the sheer love of them are probably aware of this secondary purpose. Still, it isn't often that books are collected solely for investing. Once in awhile, they are, and a chance encounter with a 25-year-old pamphlet gives us an opportunity to look back on such a scheme.

While digging through boxes of old auction catalogues being prepped for the Americana Exchange Database*, we chanced upon a pamphlet produced by Francis Edwards, Ltd., of London, around 1980. Before we continue, we need to point out that this is not the same Francis Edwards of today. Francis Edwards today is again a traditional antiquarian bookseller, just as the firm was for more than a century before this pamphlet was printed. This pamphlet dates from a brief period between the 1978 sale by the Edwards family to venture capitalists to its early 1980s purchase by the current owners. The firm of Francis Edwards is now back to selling books in the British book town of Hay-on-Wye, as well as in London, as it has done through most of its existence since founded by Mr. Edwards in 1855.

During the brief venture capital period around 1980, the firm published this pamphlet, Rare Books for the Collector From the Investor's View, Francis Edwards Limited, Creating a Portfolio. Basically, the plan worked like this. You would invest a sum of money, minimum GPB (British pounds) 500, with the firm. This, they explained, was "the minimum feasible sum which will permit a balanced portfolio of titles across subjects, authors and countries." Then, "specialists identify titles which in their opinion will provide good appreciation over a period of several years." The purchaser could take physical possession of these books if he liked, or store and insure them with Edwards for 2% per year. They could be sold at any time, but the firm explained that this "scheme" (their words, not mine) was designed for those expecting to hold the books for "3 to 5 years."