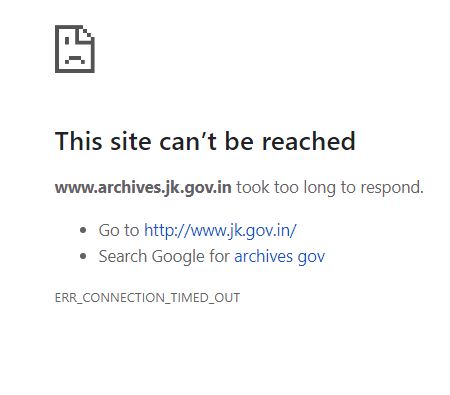 Oops. The digitization and online posting of documents is a wonderful benefit of technological advances, making all sorts of information once virtually unobtainable available to scholars and the public. Nonetheless, the government of Jammu and Kashmir in India would like a do-over on this one. They were a bit more generous with their transparency than they planned.

On March 1, the government of J&K announced the opening of this online collection of older state documents. The recently digitized material ranged from the years 1724-1985. It provided expanded coverage of material first made available in 2012. When the site first went live, the government explained. "The objective of the portal is to provide a single window access to the information and services provided by the State Government of Jammu and Kashmir."

J&K estimated the new portal would benefit over 7 lakh beneficiaries every year. That's 700,000. The J&K Governor was quoted at the announcement as saying, "The online mode will avoid unnecessary human intervention and will speed up the public delivery mechanism, besides ensuring transparency." Now we know there wasn't quite enough human intervention and too much transparency. Recently, the portal went dark.

Apparently, officials didn't check what they were uploading very carefully. The Kashmir Reader quoted an anonymous official as saying no one classified what the documents were. Some contained confidential information related to border and security issues. Once digitized, the documents were uploaded without further review. There are now 70 lakh pages, which sounds like 7 million, in a database that has not been reviewed for confidentiality or security. Once it was realized, the officials held an emergency meeting and shut the site down. It will remain dark until the material has been reviewed and the private items removed. It is estimated this will take a few months. The officials of Jammu and Kashmir have found themselves in an embarrassing situation and they can't even blame Wikileaks or Russia for the leaks.