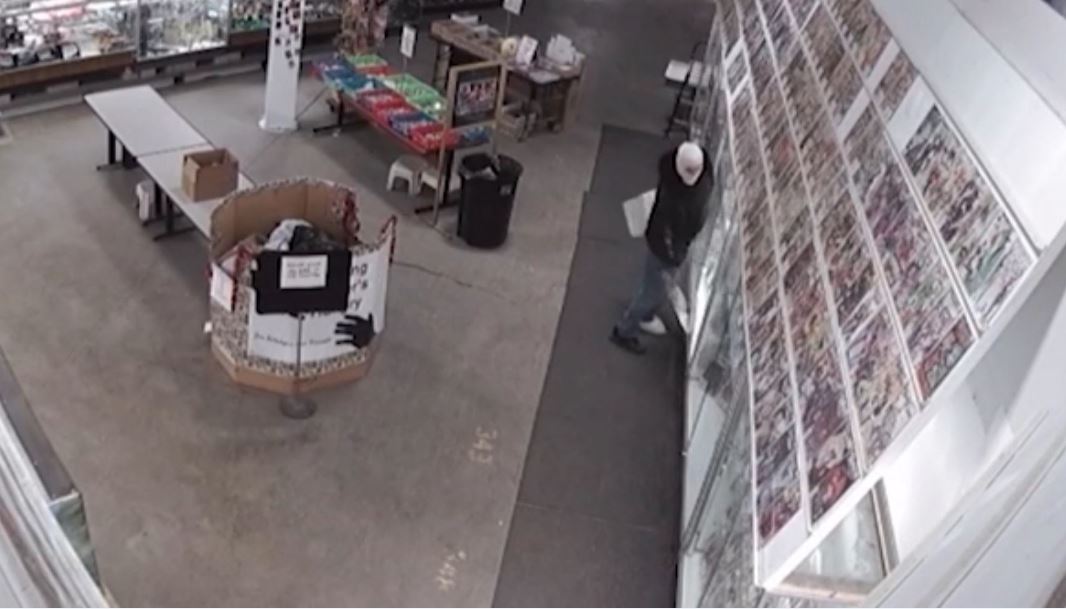 Comic book crime is no laughing matter. As the value of collectible comics has soared in recent years, so have the number of thefts and break-ins related to them. Superheroes may be able to take care of the criminals on the pages of the comics, but in real life, the task falls to regular police officers and investigators. They are kept busy.

A few weeks back, a major theft took place at Mile High Comics, not unexpectedly with a name like that, located in Denver. It was all captured on video. The question is, "who was that masked man?"

The entire crime takes about 3 minutes, most of it on camera, and despite the relatively short time, the thief appears to be in no particular hurry. What does appear clear is he knows exactly what he wants and where to go, an indication that he must have been there before, perhaps several times. He managed to bypass the store's security system, first emerging in the video as he enters the main display floor. Along with wearing a ski mask, he carries one of those plastic post office mail bins and wears a black coat. He wanders over to some locked glass displays, quickly finds the ones he wants, and pulls some sort of tool from his coat. He then proceeds to smash the glass pane on one of the display cases.

After removing a few items from that display, he skips the next display to move on to another farther down, again appearing to know specifically which display he wants to open. He smashes the glass, takes something else, and again moves down a couple of displays and repeats the procedure, each time putting the comic books in the postal bin. Next, he moves back to the two previously broken displays and takes a couple more items from them. He retraces his steps back to the first display cases he previously walked past, peers in again, but still sees nothing to his liking. He returns to the broken displays.

At some point, he cut his arm on the broken glass. Maybe it is as he reaches into one of the broken displays now or did so earlier. He reaches in and may be grabbing a piece of the broken glass. He turns away and briefly walks off camera. He comes back with a towel and some spray cleaner to wipe off the blood. Perhaps he fears he will be identified through the DNA in his blood. He thoroughly wipes off the case where he was cut, puts the towel in the bin, and quickly walks toward the exit.

Taken were 14 of the more valuable items in the store. Store manager William Moulton estimated the value of the stolen material at $42,000. The highest estimated value was a first issue of The Avengers at $12,000-14,000. Other notables included an Iron Man first, a signed Spider Man, and an original Superman fan club letter.