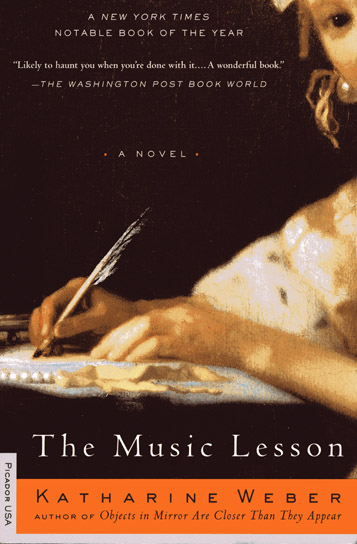 A book that requires the reader's participation

I recently discovered an author whose work I admire: Katharine Weber. She teaches at Yale and writes fiction through the eyes and voices of women. The novels I read are Objects in Mirror Are Closer than they Appear [1995], The Music Lesson [1999] and The Little Women [2003]. In these books women are complete people, the equal of men, capable of creating and surviving life's sturm und drang. Her first book was Objects, which involved her imagination but not mine. Her second book, The Music Lesson is, I think, her best. It is a very spare story, the tale of an independent, clear-minded woman gone to Ireland for infatuation and a purpose. Her most recent book, The Little Women, is a 21st century rewrite of Louisa May Alcott's Little Women, an entertaining construction set in New York and New Haven: an amusing story.

None of these books will change your life but they are all very well done and you may find in Ms. Weber someone to grow old with. Just as writers need their readers so to do readers need their writers and I suggest she may be an enduring interest. At 50 she should be writing interesting books for years to come.

Because I liked her material I asked two contemporary fiction dealers whether they knew her work and how one would go about collecting a new author. Neither had read her material and both expressed some interest in looking at her books. As to how to collect her work or, for that matter, any other new writer a reader discovers this is what I learned.

Success and recognition as an author does not, of itself, make an author collectable. Objects was a New York Times Notable Book as was the Music Lesson. In fact, in almost a dozen ways her work has been recognized although perhaps not quite to the point of being recognizable. Collecting's judgment seems to come some ten to fifteen years later when a variety of factors have had a chance to lodge themselves in the dealer's and collector's cumulative psyches. In the early years, the author's place in the field lies unattended and often unrecognized while history considers to anoint. Until that day the strong minded and opinionated can buy for a song what an opera will not procure in a few years if the cognoscenti have then chosen Ms. Weber for a permanent star in the literary firmaments.

Until that day you can parse Ms. Weber's books for sale on-line in all the shades of condition and form beginning at $1.00 plus handling. At this end of the for-sale lists there is little if any really collectible material. Reversing the order to read from highest price down confirms that Ms. Weber's material may be loaded in cannons for their flight into space but, as of today, the gunpowder has not yet been lit. We know this because while there are 238 of Katherine Weber items [searched with the date range 1990 to 2005] on ABE today, the most expensive is $65.00, a modest sum for a signed first in pristine condition. I suggest it's a bargain.