Library Thief Has Statue in Her Honor Placed Outside Library 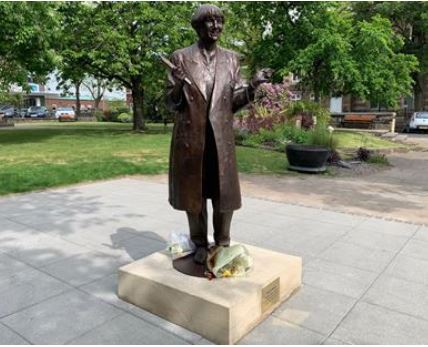 How many people who steal books from a library are honored by having their statue erected outside of it? None immediately come to mind. Well, now there is one. Her name is Victoria Wood, and while her name is well-known in England, she may be unfamiliar to most others around the world. Victoria Wood was a popular actress and comedienne, her career spanning four decades. She may be best known for her role in the sitcom Dinnerladies, but there were many more roles and stand-up performances in her career. Ms. Wood died in 2016 after a battle with cancer.

Now, here is the story of her real life role as a book thief and the statue by the library. Victoria Wood grew up in Bury, a town within Greater Manchester. She was not a professional book thief, but as a young girl, she evidently took books out of the Bury Library and did not return them. He sordid past would never have been known had she not decided to fess up in 1999, when she was 46 years old. That was when she discovered an old children's book in her possession, and when she looked inside, discovered the Bury Library markings. It stirred up memories of long ago improper behavior. She whipped off a note of apology and returned the book, along with a donation.

In her letter, Ms. Wood explained, "Dear Sir/Madam, I've just looked at the label inside this book, and I have a feeling I must have stolen this from your library! I was never a member of Bury Library, but did take a lot of books from the children's section as a young teenager - I'm very sorry - here's a small donation to help replace a few! Best Wishes, Victoria Wood." Enclosed was her donation of £100 in cash.

The life size statue was unveiled on May 17. The placement across from the library was not meant to honor her youthful indiscretions, though it is hard not to notice the irony. She was honored for being perhaps the most famous person to come from Bury, or at least in many years. When her brother proposed the statue the town council jumped at the idea, expressing their pride in her being a native daughter. All is forgiven.