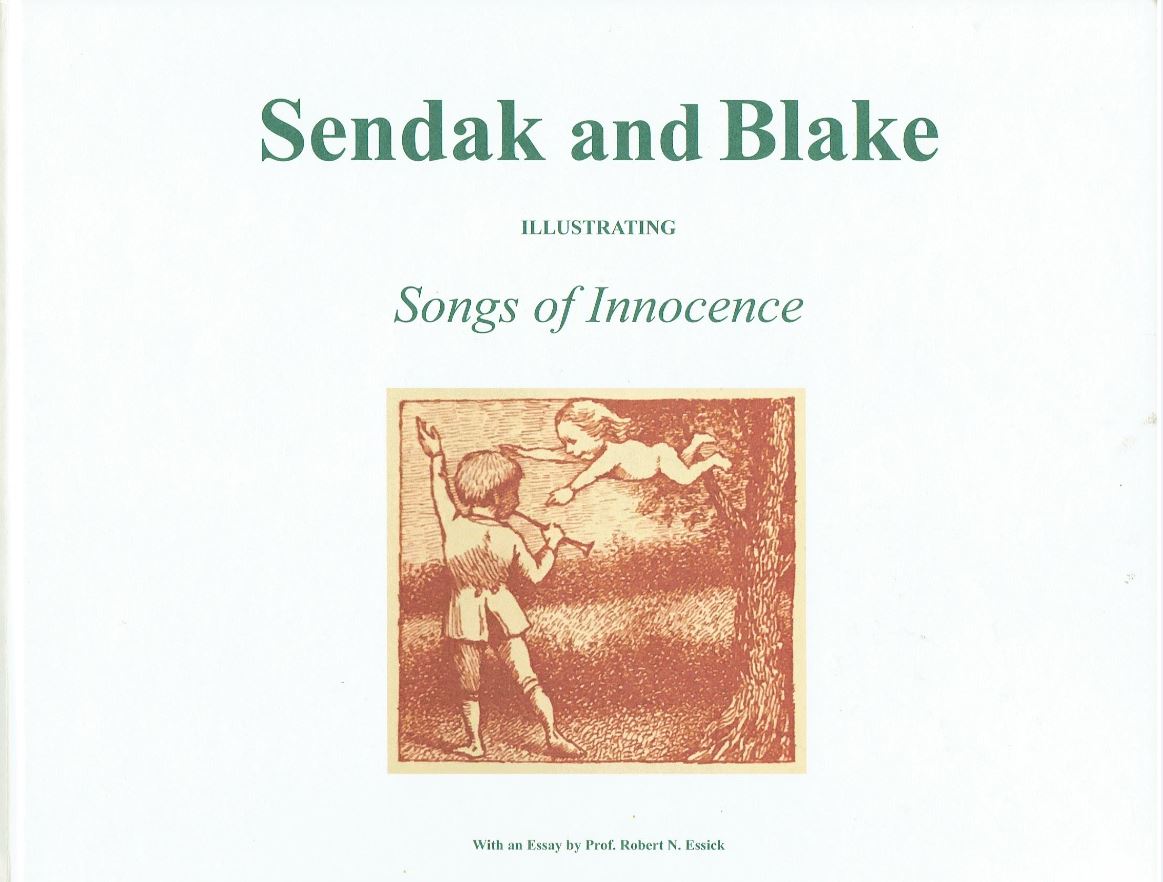 In 1967, the acclaimed children's (and adults') author Maurice Sendak traveled to Britain to promote the first English edition of Where the Wild Things Are. It was almost his last trip anywhere. Late one night, he took ill, walked to the hotel room of his guide, Judy Taylor Hough of his publisher, the Bodley Head, and collapsed in her door. The hotel's doctor thought he had a case of indigestion; Ms. Taylor Hough feared worse. She called an ambulance. Sendak had had a major heart attack and her quick actions likely saved his life.

Sendak displayed his appreciation by creating seven drawings for The Bodley Head's annual Christmas keepsake. They were based on the poems and artwork in William Blake's Songs of Innocence. Only 275 copies of the keepsake were printed and none were offered for sale. They were given out as gifts to The Bodley Head's authors, editors, and others associated with the firm. Most have probably been permanently lost. It is a great Sendak rarity.

A half a century has passed, and so has Sendak, but these obscure Sendak drawings are of great interest. Those who have pegged Sendak as simply a "children's author" would not suspect that Blake was one of the greatest influences on his life. Sendak was not the first to create new illustrations for Blake's poems in the years since he wrote and illustrated them. However, Sendak has his unique take on Blake. His characters are not wild things, but they are Sendak. There are similarities in many of Sendak's settings to those of Blake, but these are not copies of Blake's originals in a different style. Sendak illustrates different parts of the poems, or interprets them in his own way. I don't know whether every Blake devotee will appreciate them, but certainly every follower of Sendak will.

While the original keepsake is very difficult to find, the illustrations have recently been reprinted in an exhibition catalogue created in conjunction with an exhibition at the Society of Illustrators in New York. It contains the seven drawings published in the Bodley Head keepsake along with 22 preliminary pencil studies drawn by Sendak. The illustrations are interwoven with a comprehensive essay by Prof. Robert N Essick. Prof. Essick describes what Blake was revealing in his original illustrations from 1789. He then shows the similarities and unique takes provided on the illustrations provided by Sendak for the poems. It is a valuable guide to understanding the mind of the two artists, separated by almost two centuries.

Copies of the exhibition catalogue with the Sendak (and comparable Blake) illustrations is available from Battledore Ltd. Their address is P. O. Box 2288, Kingston, NY 12402 (USA). Battledore may also be reached at 914-316-8144 or sendak@childlit.com. The price is $30 plus sales tax where applicable and postage. The title is Sendak and Blake Illustrating Songs of Innocence.