"The Holy Grail of Whiskey" Sells for $1.1 Million 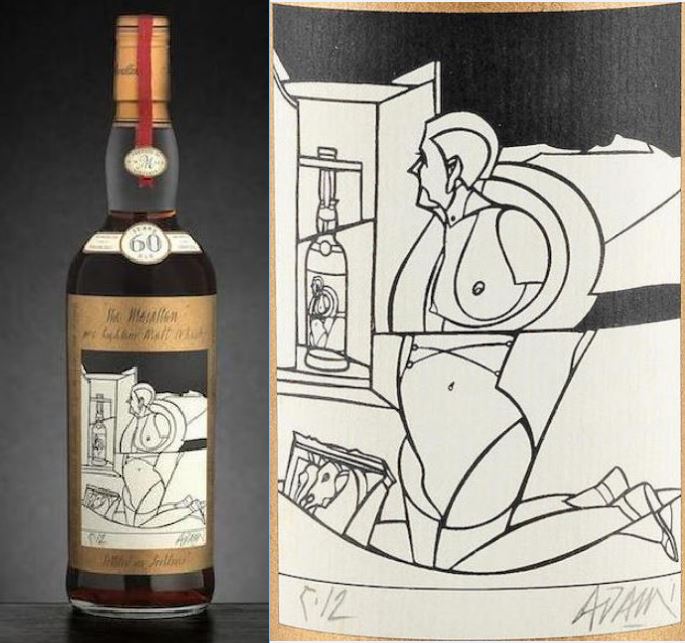 The Whiskey bottle, and close up of the label.

In news from the world of collectibles, a bottle of whiskey sold last month at Bonham's for $1.1 million. It is described as the "Holy Grail of Whiskey." Holy Cow! Did someone drink up that bottle before, instead of after, the auction?

In case you are wondering why this news is appearing on a site devoted to collecting books and paper, other than that some collectors have been known to tip a few on occasion, it appears that the price was based more on the paper label on the bottle than on what is inside. The whiskey itself was produced by the Macallan Distillers, distilled in 1926. They didn't get around to bottling it until 1986 (hence the 60 years on the label). It is aged, and undoubtedly quite good, but that doesn't make it worth $1.1 million. It's mostly the label.

The label was created in 1986 by Italian artist Valerio Adami. Adami himself is still very much alive, now age 83. I must confess that I had not heard of him prior to this sale. He was described as an expressionist in his early career, developing a more distinctive style later on. His drawings often feature black line borders on the figures within his images, even those in color. As far as I can tell, he is not one of the world's best-known artists. He is not up there with fellow countryman Michelangelo. Still, some people obviously appreciate his work. Perhaps he goes best with a glass of whiskey.

There were 12 of these Adami whiskey bottles produced in 1986. Another one went earlier this year for the more modest price of $1.05 million. It is not known how many of them still exist. Did someone foolishly drink theirs up and toss out the bottle in 1986?

If one considers this a "work on paper," rather than a work on a bottle, looking back at last year's auction prices in the field, this would have been the fifth most expensive item for the entire year. Only an early printing of the Declaration of Independence, a handwritten note from Albert Einstein, an autograph manuscript by Honoré de Balzac, and a 1460 printed Bible, would have beat it out. Darwin, Washington, even another fellow countryman, Galileo, trailed far behind.

Is it worth $1.1 million? You can look at the image above and decide for yourself (click to enlarge). I don't know. She looks as perplexed as I am. I guess it's sort of interesting. Not particularly my taste, but beauty is in the eye of the beholder. I don't think I would pay $1.1 million for it, but thankfully, I don't have enough money to have to confront that decision. The buyer was not so lucky, having to make this difficult choice. Perhaps when he (she?) thinks about that choice more clearly, he will want to drink what's inside.

*See the Letters to the Editor for a comment on this article.