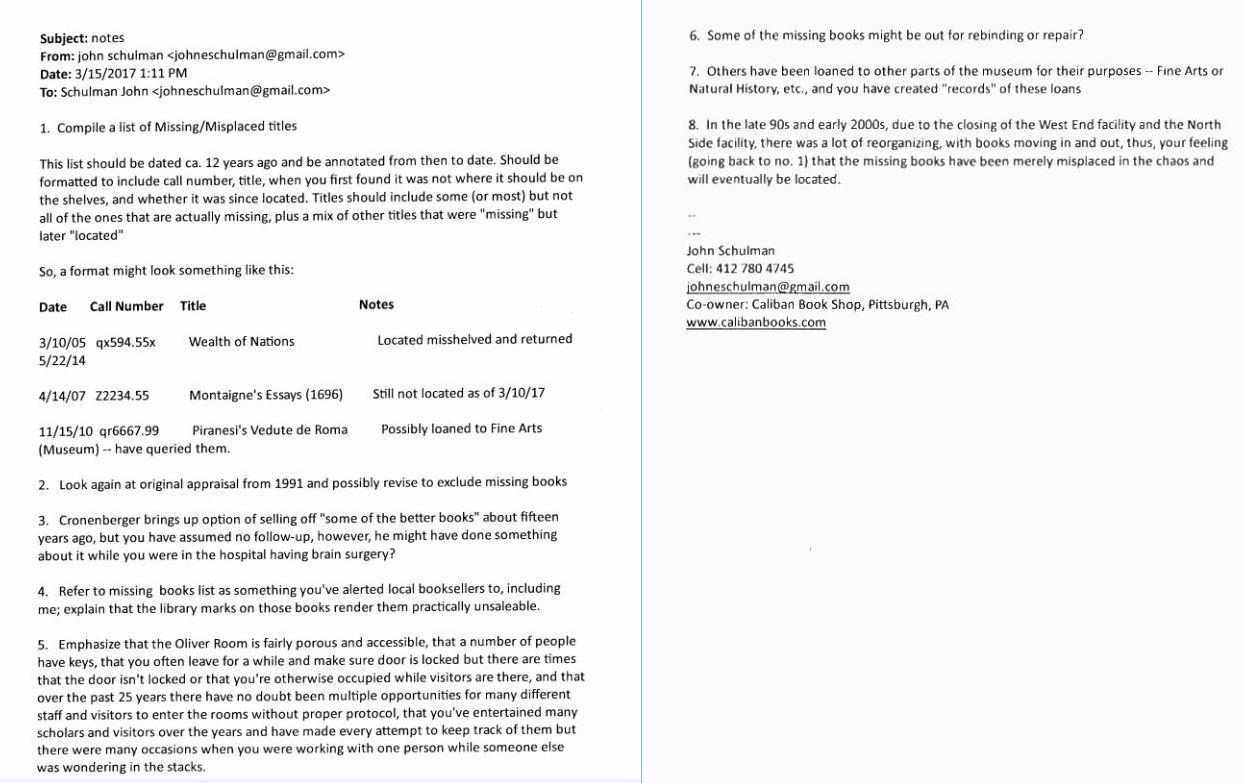 A preliminary hearing was held at the Allegheny County Common Pleas Court in the case of the $8 million theft of books and maps from Pittsburgh's Carnegie Library. Two individuals, library archivist Gregory Priore and Pittsburgh area bookseller John Schulman, have been charged with the crime. The next step, a formal arraignment, has been scheduled for November 29. Meanwhile, it is expected there will be meetings between the defendants' lawyers and the District Attorney to hammer out common understandings about the parameters of the case if not a settlement of charges.

The Carnegie Library theft was not a one-time event. It continued over a period of almost two decades. Archivist Priore has already admitted to the process of sneaking numerous books out of the library with no intention of returning them. He claims he delivered them to Schulman, who in turn sold them through the Caliban Book Shop, only a block away. Books that have been traced to the Carnegie Library ended up with other dealers and collectors who purchased them from Caliban. Prints removed from books were also sold on eBay. Some were found in Caliban's inventory. Schulman's attorney has hinted at one possible defense for his client, that Schulman was unaware that Priore had improperly removed them from the Carnegie Library. In at least one case, Schulman had explained to a bookseller to whom he had sold a Carnegie book that it had been properly deaccessioned from the library.

Perhaps in anticipation of or in response to this line of defense, the District Attorney presented email correspondence to the court during this latest hearing. One may have sounded particularly incriminatory. It was said to have been written by Schulman. However, the email was never actually sent to anyone. Dated March 15, 2017, it shows as having been sent by Schulman to himself, possibly to save it for future use. It reads as if it were a list of suggestions or instructions on how to cover up a book theft. The presumed/alleged eventual intended recipient was Priore, though there is no mention of his name or position at the library. The timing of the email coincides with the audit the library was taking of its rare book collection, which turned up the fact that many valuable books were missing.

The unsent email offers eight possible actions. The first says to create a list dated 12 years earlier, with updates, of books discovered missing from the shelves. Some would be the titles of stolen books, other would not. Some would say they were misshelved and found, others still missing. Another suggested revising a 1991 appraisal to remove some of the stolen books, implying they were already missing much earlier. Another said to note that local booksellers, Caliban included, had been notified of missing books and saying the library markings would make them "practically unsaleable."

Moving on, a suggestion says to emphasize the porousness of the Oliver (rare books) Room, how many people have keys, sometimes the door isn't locked, and so on. Other suggestions were that some books might be out for repair, loaned to other parts of the museum, and that some may have been misplaced as a result of the closing of part of the facility years earlier.

Again, we need to emphasize there is no indication this email was ever sent to Mr. Priore nor a concession from Mr. Schulman that he actually wrote it. The authenticity or explanation of it will need to be determined at a later date. The District Attorney presented other emails involving the parties. In one directed to a different person at the library, Schulman purportedly shows an interest in purchasing books the library no longer wants, but not ones with deaccession or other library stamps as they have lost almost all of their value.

Along with maintaining that Mr. Schulman was not aware that Priore was illegally removing books from the library, his attorney has indicated that he believes the $8 million price tag is grossly inflated. He believes that the number and value of missing books is much smaller, and he hopes to work with the District Attorney to determine a more accurate figure. At that point, he indicated, he is hopeful that a resolution of the entire matter may be reached.