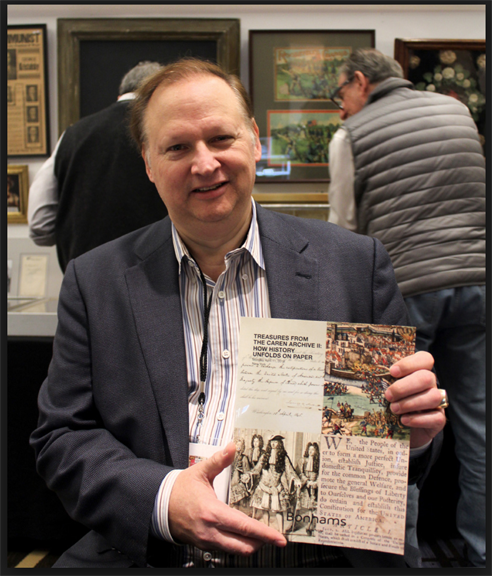 Eric C. Caren of The Caren Archive recently announced to Rare Book Hub that he will be holding his 7th single owner auction of ephemera at Bonhams. This will be their 3rd collaboration and according to Caren, his best auction to date.

This sale will be held during New York Book Fair Week in the Big Apple in March, 2019, when there are three collectible paper related fairs and several dozen auctions.

Caren, while describing the material as exceptional, is primarily providing category but not lot information.  Among the categories are printed, manuscript and photographic paper and ephemera including broadsides, manuscripts and autographs, colonial and Revolutionary War material including an unknown American broadside on the Battle of Bunker Hill, Civil War ephemera including a wallpaper Confederate newspaper, western Americana including 2 rare Custer items, baseball including an important Babe Ruth item, and rare newspapers and periodicals, stretching back five hundred years.

His auctions are typically strongest in Americana, but also include English, Continental and Asian material. A rare illustrated broadside of the Execution of King Charles I in 1648 and an original drawing of Matthew Perry's ship are two examples.

Eric Caren has been at this for 50 of his 58 years. He attended the very first paper show at Iona College in 1978, while he was still in High School and was an early member and later Director of The Ephemera Society of America. "Back then, rare book dealers often ignored paper/ephemera, but times have changed.  Today approximately a third of Ephemera Society exhibitors are ABAA dealers.”

Mr. Caren has a storied history and its details will no doubt someday be a book.  But he brings an exceptional memory and keen eye to his collecting and his auctions are “not to miss” affairs.

There will be 3 previews for this auction. The first will be in Manhattan during Americana Week in January 2019, the next in February in California during the San Francisco Book and Paper Fair, and the final one during New York Rare Book and Paper Week in March.  The date for the sale will be added to the Rare Book Hub Auction Schedule once it’s announced.

For further information contact Dr. Catherine Williamson at Bonhams by email at catherine.williamson@bonhams.com or by phone at 323-850-7500