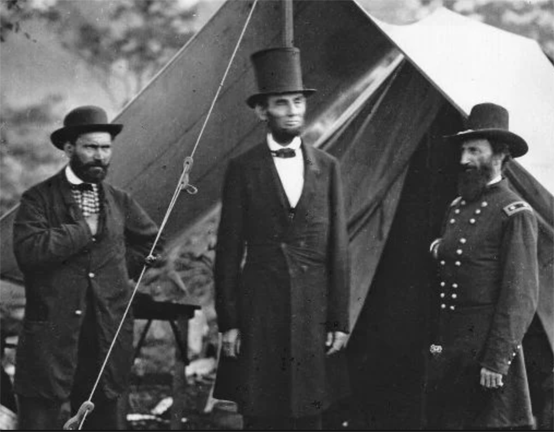 Lincoln and his hat were inseparable

Lincoln would have something to say about this and it would be witty if this was a laughing matter.  But it’s not and he wouldn’t.  The story goes, and various images show, that President Lincoln attended a play at the Ford Theatre on April 14, 1865.  There he would be shot by John Wilkes Booth and die the following morning in a nearby boarding house.  At 5:21 am on the 15th he passed away and as he did, gave birth to the Lincoln ephemera market that has grown by leaps and bounds over the ensuing decades.

Anything he owned or simply touched immediately became a collectible.  Anything he signed became valuable. Anything said to be connected was enough to set the hounds braying.

In Illinois the Abraham Lincoln Presidential Library and Museum is thinking about selling some of its collection to get cashflow positive and they are encountering the higher standards of auction authentication that apply today.  We know this because the New York Times recently wrote about a stovepipe hat the institution is thinking about selling that, so far, lacks conclusive authentication as one of Abe’s chapeaus.  It is the right size and the hat band is stretched, as was Lincoln’s habit, to store notes and papers there but otherwise there are no conclusive links.  This has caused the library to commission studies by the FBI and others including DNA analysis  but so far, no DNA or other factors support its Presidential connection.  Without that connection the hat is worth perhaps $100 and the hat was the capstone of a $23 million investment the Lincoln Museum made.  Ouch!

Provenance has long been the gold standard for collecting.  An item known to have been owned, annotated, signed or bound in a personally identifiable way can add enormously to value.

The temptation to fudge such details is therefore very strong.  The world is awash in unsigned paintings that are magically transformed into highly desirable collectibles when links to the famous or infamous are confirmed and many are the culprits willing to add telltale details to strengthen such connections.  It’s really nothing new.

What has changed are two factors.  Legal safeguards protecting buyers are increasing and scholarship, once the province of a few, is now available on line to the interested and attentive at nominal cost.   So we have a better informed field and laws that better protect buyers against fraud or error.   There aren’t really any statutes of limitation.

The open window in the otherwise impenetrable fortresses of valuation is that increasingly the cost efficient transfer is not to new buyers via the auction path, but rather by gift to institutions who are not inclined to look a gift horse in the mouth.  And that’s okay if the donor receives the anticipated tax credit and the institution never sells.  When they do, however, if by auction, the changing standards of evaluation will, in effect, cause such material to be reconfirmed and there is no saying that the optimistic approach taken when material is gifted will be reaffirmed by the sellers, particularly auction houses, if these things come their way.

In Illinois these days the issue is straightforward.  They have bills to pay and material that can be sold to lighten the burden so long as the true value can be understood and estimated.  This suggests that the research has to be done before the purchase or acceptance as a gift.  It seems impolite to look a gift horse in the mouth but actually, that’s exactly what needs to happen.  Otherwise, you can end up looking like a horse’s ass.