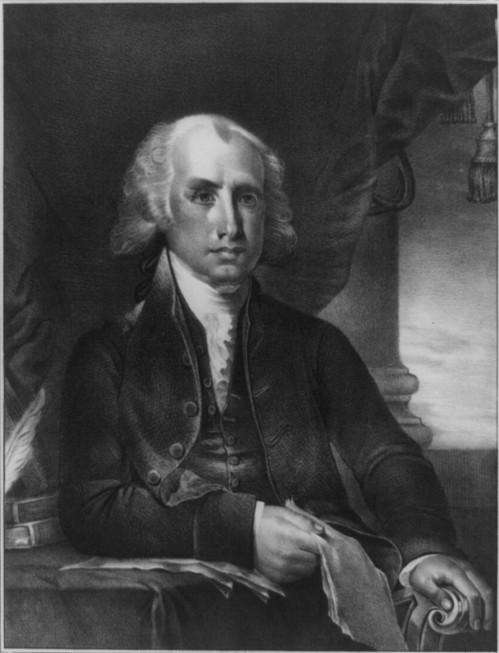 "Father of the Constitution" James Madison.Photo courtesy of Library of Congress.

"At his inauguration, James Madison, a small, wizened man, appeared old and worn...but whatever his deficiencies in charm, Madison's buxom wife Dolley compensated for them with her warmth and gaiety." That's a heck of a sendoff for one of our founding fathers, but that is his introduction on the official White House website. Oh, and by the way, he was also the "Father of the Constitution."

It is true that Madison was a sickly looking man, and certainly did not cut the impressive figure his wife did. Still, he managed to stay alive long enough to put together a 40-year political career, and then live another 20 years in retirement. We should all be so sickly. During his career, he served in the Virginia Assembly, where he helped draft that state's constitution, was a major figure in writing the U.S. Constitution, co-wrote the Federalist Papers which helped sell that constitution to the nation, served in the House of Representatives, was Jefferson's Secretary of State, and capped off his career as President of the United States. He was drawn into war with Great Britain during his administration, and while something of a military toss-up, it was perceived in America as a great victory. The result is that when he left office, his Democratic-Republican political party was the only viable party in existence, the anti-war Federalists disgraced and irrelevant. The "Era of Good Feeling" was underway, one of the happiest times in this nation's history. Still, despite these later achievements, it was Madison's role in creating the Constitution and its Bill of Rights that are probably his greatest and most lasting contributions to his country.

The Library of Congress has recently opened its enormous collection of James Madison material to online research. It is exhaustive and exhausting. It is called, "The James Madison Papers." Madison created a lot of papers during his lifetime. Most notable were records he kept of deliberations at the Constitutional Convention. They probably provide greater insight to the thoughts of those who created this amazing document than anything else we have. But those are just a portion of what is now available. The collection runs from documents of his father long before Madison was born, to those from his wife and stepson, John Payne, long after he died.

Unlike some Library of Congress exhibits, this is not geared toward people looking to learn a little about James Madison, or gather a summary of his career. There is a little of that, but not much. There are many better places to go on the internet for that type of information. What you will find here are images of documents, approximately 12,000, written by or to James Madison or family members and associates. There is no way to sit down and read all of this. No, this is a site meant for research. Obviously, it is an absolute treasure of material for anyone conducting serious research about the life of Madison. However, it is also a wonderful resource for those interested in specific events, or studying the lives of the people with whom Madison corresponded, and over the course of his life, that was a great many people.