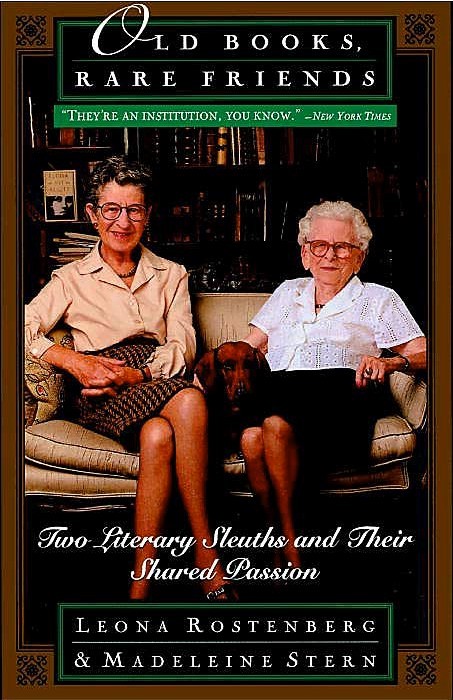 Leona Rostenberg (right) and Madeleine Stern on the cover of one of their many books.

One of the longest bookselling careers ever came to an end March 17 with the passing of Leona Rostenberg at her home in New York City. Ms. Rostenberg spent some sixty-five years in the field, which must be some kind of record for a person not born into a bookselling family. Indeed, she was already many years out of college, having spent several years doing research in Europe, when she applied for her first job in the trade. Ms. Rostenberg was 96-years-old when she died.

While Ms. Rostenberg and her almost life-long friend and partner, Madeleine Stern, operated their Manhattan bookshop for over half a century, she was more than a mere book merchant. She was a writer and researcher as well, often writing as co-author with Ms. Stern. Ms. Rostenberg was an expert in the field of early printers, writing her doctoral dissertation (never accepted) and many books on the subject. However, she is best remembered for some detective work carried out by her and Ms. Stern early in their careers. It had been rumored that Louisa May Alcott, most known for her novel "Little Women," was the pseudonymous author of other works, but no one knew what. Digging through Alcott's papers, the partners discovered a reference to an "A.M. Barnard." They had discovered another series of Alcott books. They revealed their findings in 1942, and named some more discoveries in 1975.

Ms. Rostenberg got her first job in the book trade after returning from studies in Europe in the 1930s. Herbert Reichner was one of the Austrian and German booksellers who fled the looming horrors on that continent to set up shop in America. He was looking for an assistant who understood European books, such a person being a rarity in pre-war America. Ms. Rostenberg fit the bill, and so she went to work for Reichner. She evidently did not find that job particularly pleasant, but it did prepare her to strike out on her own a few years later. Soon joined by her friend, Ms. Stern, a business and partnership was started which would not end until broken by death a few weeks ago. Along the way, Ms. Rostenberg would sell books to many of the largest collectors and most important institutions, as well as serve from 1972-1974 as President of the ABAA (Antiquarian Booksellers' Association of America).

However, we are not here to write an obituary, nor even a eulogy, for Ms. Rostenberg. Her eulogy is written in her career, and she will undoubtedly be included in any list of the important booksellers of the 20th century. What we do want to recount are some words she and Ms. Stern wrote only a few years back, when Ms. Rostenberg had already passed age 90, because they speak to the importance of old books in this new age, even the age of the internet. Her words are not just relics of the past, but address the role of antiquarian books in today's world. What she says is vitally important for those who collect or trade in antiquarian books, because many people question what their relevancy is today.