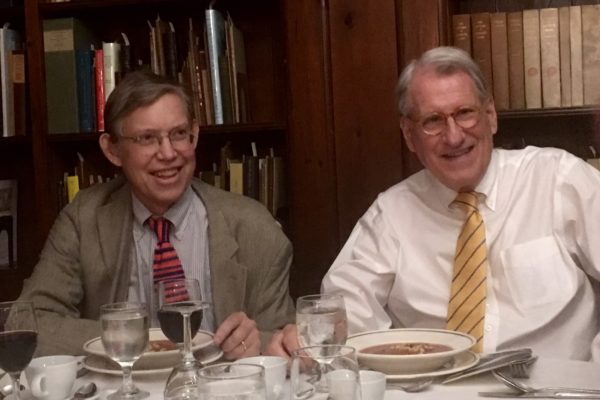 Bill Reese, left, with Joe Felcone in the last year

In the rare book business a few names resonate down through the ages, their quotes, collections, statements, catalogues and books so substantial that even their ephemera and paraphernalia become collectible.  Often their hard edges and hard truths dissolve in the alchemy of death that transforms careers into dirges of praise.  Bill Reese is the latest of such men, one of the very few who can be mentioned in the company of Streeter, Eberstadt, Rosenwald, Rosenbach and Huntington.  As collectors and/or dealers they had their strengths and weaknesses but in the fullness of time have emerged as transcending luminaries among the frequently well-educated and always gifted who pursue not just books, but also their relationships and stories that illuminate the field.  For them, as for few others, authors, material and circumstances have danced in their imaginations to become original insights and perspectives that today are orthodoxy for others.  Bill had that gift, that magic that will live on through his choices, clients, catalogs and quotes.  It has been said of others but it is no less true here today; he belongs to the ages.

He built collections and he built mine.  The first one was about the new world before 1625, and ten years later, the opening of the American west.  He was an intellectual raconteur offering insights and objectives, illuminating possible paths but never cluttering them with irrelevant choices because he had them in stock.  He offered perspective and always took my calls.  I had questions and he often had the answers.  And he offered, when called for, unvarnished truth.

Since 2000, building the Americana Exchange Database and its successor has been complicated.  He suggested the first database structure we employed, was the first to subscribe, subscribing at the highest level, and maintaining his membership every day since.

In 2009, the rare book field swooning from the recent financial decline, I sent to auction 81 items to test the market recovery and he, without ever saying he would, broadly supported the sale ensuring its success and signaling that the bottom was in and recovery for the field at hand.  We had no understandings, he and I.  After the sale I sought to thank him and he simply said, “it was good business.”  It was also extraordinary friendship and while I live, my gratitude will neither decline nor diminish.

We will all go on, but there is now an irregular piece of the collecting puzzle missing, that will stand empty, not to be filled or replaced, simply in its shadowed emptiness a space uniquely his that will remind us of who we lost and what we miss.