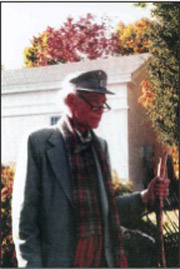 In the 1960's and early 1970's I frequently attended the Saturday night auctions that Cal Smith of Pleasant Valley, ran. I was selling advertising at the time and Cal would let me run his two column 5 or 6 inch ads in my family's newspapers just across the Hudson in southern Ulster County. These ads were always at least a little effective because my brother and I used to go, and if there were interesting books, we would bid. These auctions were a place to see, if not necessarily speak with, other "book people." Some were friendly and some not. One of the bibliophiles I used to see before I knew the term, was Rad Curdy, a very interesting character.

Rad, born Radford B., who died in 2002 at 67, was a dozen years older and many times smarter than I was about books then. He had a disheveled appearance. His clothes could look like Good Will throwaways and I remember that his belt had once fit someone much larger for it tucked around the quarter pole. He was friendly in a distant way. He first approached me at Cal's wondering what I was after. A week later he was at my door with several boxes of material he wanted to convert to cash and it was impossible to ever turn him down. The material he brought was always in exceptional condition and he could, with no prompting or preparation, deliver the story of John Burroughs, a local deity, Frederic Goudy, once a local resident, or the grainy details of Poughkeepsie history. He simply lived a life inside of history and the printed word was one of the ways in which knew and collected his passion. As we now know he collected more than books.

You could not visit his house and he would not tell you where he lived. To reach him you called the paper where he worked. Once, when calling the Peekskill Mountain Star, I asked "What's the story with Rad?" "I've no idea but he's good." This person knew no more than me. Rad's explanation about his house was that he collected Revolutionary War material and that it was very valuable. Its location was and today remains a secret.

For years after I moved away in late 1974 I used to ask my brother if he had seen Rad. He would say "yes, but it's been a while. I saw him at the so and so auction." The last time my brother saw Rad was about a year ago. He died in 2002 but if you knew Rad or my brother you would understand. Death was not going to keep Rad out of the auction rooms.