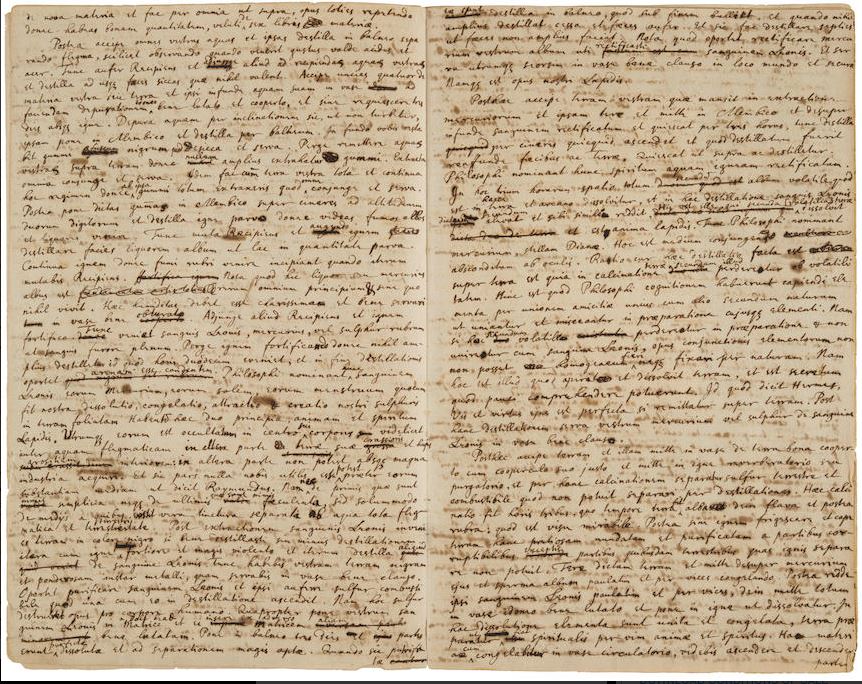 The University of Illinois reported that it had recently obtained an important late 17th century document for its Rare Book and Manuscript Library. It did not come cheaply. They paid $275,000 for it at an auction at Bonham's. It was funded by a gift of $500,000 from university graduates Jim and Lionelle Elsesser. It will not be put on display, other than at an unveiling ceremony later this summer, but will be made physically available to scholars and digitized for the rest of the world to see.

The document is a handwritten manuscript, eight pages in length, headed Opus Galli Anonymi. That's Latin for "Anonymous Work of the Gauls." It presents detailed instructions for creating the philosopher's stone, the miraculous substance that can turn lead to gold. Of course, it doesn't. If it actually told us how to prepare it, this would be worth a lot more than $275,000. For centuries, people sought this wondrous substance that would make them rich. It does not exist, though perhaps someday we will figure out how to split apart lead atoms and turn them to gold.

You may think this document was prepared by some 17th century alchemist, a pseudo-scientist kook fruitlessly seeking riches. It was not. It was created by one of the greatest scientific minds that ever lived. This manuscript was handwritten by that great scientist, Sir Isaac Newton. As the heading suggests, it was not Newton's original work. He copied it from some French writer, quite possibly translated it as well. We don't know who the author was as no record of it has shown up anywhere else. It must not have been published. However, this does not mean that Newton contributed nothing more than a scribe. It has numerous deletions and replacements. Either he added something to it, or was such a poor scribe or translator that he had to constantly correct his work.

That still leaves us with the question, what was a legitimate scientist like Newton doing playing around with alchemy? Einstein didn't do that. I guess Newton was no Einstein? Well, actually he was, just in another time. We didn't have a completely separate field for science back then, let alone each separate type of science. There weren't chemists, physicists, astronomers, geologists, alchemists, theologians, and philosophers. They were all philosophers, sometimes with separate specialties, but all philosophers. That's why it was the philosopher's stone, not the alchemist's stone. Newton wrote about physics and chemistry and theology because he was a philosopher. They were all aspects of the same universe to him.

Newton dabbled in alchemy, not so much to get rich, as to make discoveries. He thought gravity might be related to some chemical reaction, and what is today chemistry and alchemy were particularly closely related. Besides which, it was thought the philosopher's stone could do other amazing things, such as granting the possessor immortality.

Newton was also deeply religious, at least by today's standards, though some of his views were sufficiently unorthodox in his day he feared for his life if he revealed them. Nevertheless, God figures prominently in the operation of his universe, making the various heavenly bodies move in a predictable manner. Gravity doesn't just happen without a thinking mind behind it. Scientists today would not speak of it this way, but in the age when all fields were combined into philosophy, one could readily move from one to another. Newton was a child of his time, a brilliant one, but still bound by his connection to the 17th century. One can only wonder what he would have come up with had he lived today.