Women in the Antiquarian Book Trade 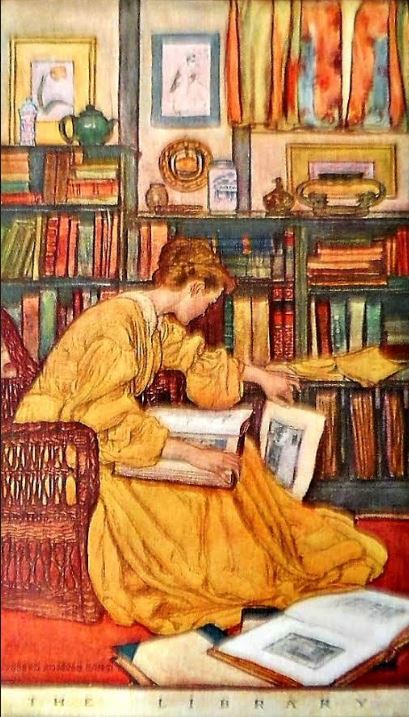 Whether in the library or in the shop there have always been women in the book trade as shown in this charming vintage illustration by Elizabeth Shippen Green.

As a woman who was born and raised in the trade by a mother who was also a book dealer (and ran a tight ship), this is a subject I know well from first hand experience.

And while it is true that most of the big names and bright lights in the antiquarian field are still men, that by no means diminishes the fact that there were, are and will continue to be strong, important and savvy dealers, librarians, archivists and collectors who are female.

In modern memory the starring role went to Leona Rostenberg and Madeleine Stern. These two partners had a dazzling inventory, a stellar client roster, lived in a style we would all like to be accustomed, and were no slouch as writers and scholars. They were active in the ABAA (Rostenberg as President from 1972-1974) and founding the New York Antiquarian Book Fair, an event held annually since 1960. www.ioba.org/standard/2011/09/rostenberg-stern-an-appreciation

One of the books I treasure most is a copy of Between the Boards - New Thoughts on Old Books (1978), inscribed and signed by both women “With every good wish” to my mother, Petra Netzorg

Ah, Petra (Pete) Netzorg, now there was a lady in the old school tradition. She was partners with my dad (Jock - to his friends) at the Cellar Book Shop (ABAA). At the peak of their 50 year run as specialists in books about the Philippines and SE Asia, they never had more than four or five employees, but she ran the operations end as if it were General Motors.

We at Cellar Book had our ways. We observed all the old courtesies, including “courtesy to the trade,” which is an olden days expression meaning a discount is available if you can show that you are a legit book dealer or fellow antiquarian.

I don’t think any Filipino writer or scholar ever passed through Detroit who didn’t end up at our house for dinner. But that said, you could not just drop by the shop, you needed an appointment, and even with an appointment it might not be easy to find us because there was no sign and it wasn’t exactly a trendoid neighborhood. For many years the place to find my mother was upstairs over a Black beauty parlor in a mostly Black neighborhood and there she reigned supreme.

I apprenticed in the packing room of Petra Netzorg. Therefore I can pack anything, to the highest and most demanding global specifications. I also was an active participant in her long running dealings (OK war) with the US Postal Service. When those packages went astray, or the mailman got huffy about having to climb all those steps with so much heavy stuff coming in and going out every day there could be, shall we say, conflict.

My mother wasn’t the kind of person who let the post office push her around and to put it in a charitable light most USPS employees at our post office wanted to avoid a personal visit from Mrs. Netzorg if humanly possible.

Many dealers, like my dad, put the emphasis on the acquisitions side. His goal was to have something new and tasty to suit scholarly or historical interests of our clientele. But my mother’s forte was operations and the care and feeding of customers or would-be customers. Back in those days we mailed mimeographed lists. She typed the master stencils for frequent issues of “Cellar Arrivals” (by subscription only), the green and white multi-page notices of "new and choice" books that appeared between formal catalogs. As for me, I turned the crank and got that awful purple ink all over my hands and clothes.

In the quest for customers, whether by mail or in person, Petra Netzorg could be like a ship under full sail. At frequent intervals she gathered up her business cards, rolled up the banner with the shop name, packed her bag and flew off to attend the conferences and scholarly meetings of the many different Asian studies societies. There she schmoozed with librarians (then mostly women of equally exacting standards), graduate students, professors and academics of all stripes. In later years the academics were were joined by newsmen and women on assignment to far away places. As the Vietnam War dragged on she got to know many researchers from TV and film, to her they were all customers.

The truth is my mother was not fussy; she never met a purchase order she didn’t like and in the pre-Internet years both she and my dad raced to see how much money was in the mail. As for who ran the show, at the Cellar Book Shop: my dad ruled the basement but my mother ruled the shop: you did it her way or not at all. I'm pretty sure that out in Rare Book Hub land there are still lots of women like my mother who remain the backbone of “getting the right book to the right person at the right price” - or so said a sign that hung over her desk for years, along with her own personal motto “Carpe Diem.” I have that one over my own desk.

Fast forward to the present moment. Here are a some links I can recommend on the distaff side. A few of the younger names that come immediately to mind are Heather O’Donnell and Rebecca Romney of Honey & Wax Booksellers (ABAA) based in Brooklyn, NY, whose claim is “We handle unique books, striking books, books with no downloadable equivalent.” www.honeyandwaxbooks.com

On the other side of the continent look for Elizabeth Svendsen of Walkabout Books (ABAA) in Southern California. She is also a standout specializing in exploration, travel, adventure and mountaineering. www.walkaboutbooks.net

As for the veterans, I’ve long admired Texas based Dorothy Sloan, well known for her Western Americana auctions, publisher of the Zamorano 80 (Distinguished California Books selected by members of the Zamorano Club) and many other important offerings. Find her current auctions at www.dsloan.com/cms/

On the social media side I am especially encouraged by the rapid growth of a relatively new Facebook page: Women in Rare Books & Manuscripts. This page started last year and now has over 600 followers. It features a steady stream of useful and informative posts that help keep women in the trade connected. www.facebook.com/groups/385258785175987/

Speaking of manuscripts I spoke with Polly Beauwin of Richmond Autographs in London. Beauwin has specialized in this area for more than 25 years, first at Maggs and more recently out on her own. She credits her expertise to another woman, Hinda Rose, who headed this specialty for Maggs for over 40 years, and with whom she apprenticed. Beauwin arrived at Maggs to work on catalog design but was soon assigned to “help out” under Rose and eventually became an expert herself.

On her website she writes of Rose, “She had a good eye, a tremendous depth of knowledge and a lively wit. It is a privilege to know that I can pass on at least some of her vast knowledge to new collectors.”

In this age where so much is digitized and even relatively scarce books are readily available, Beauwin finds the allure of autographs and manuscript materials continues to increase. She suspects a least part of the charm is that these items are “one off” -- the British way of saying unique or one of a kind.

Beauwin said that though autographs are only a tiny segment of the antiquarian field, for her “it’s going strong.” How’s she doing? “Well enough to pay the extortionist London rents,” she replied.

According to her website, “At Richmond Autographs you will find a wide selection of letters, documents and photographs covering history, literature, theatre, music art and science, in English, French and sometimes German and Italian. The French Revolution and the Napoleonic era is one particular specialist interest, and you will always find a selection of material from this period here.” www.richmondautographs.co.uk