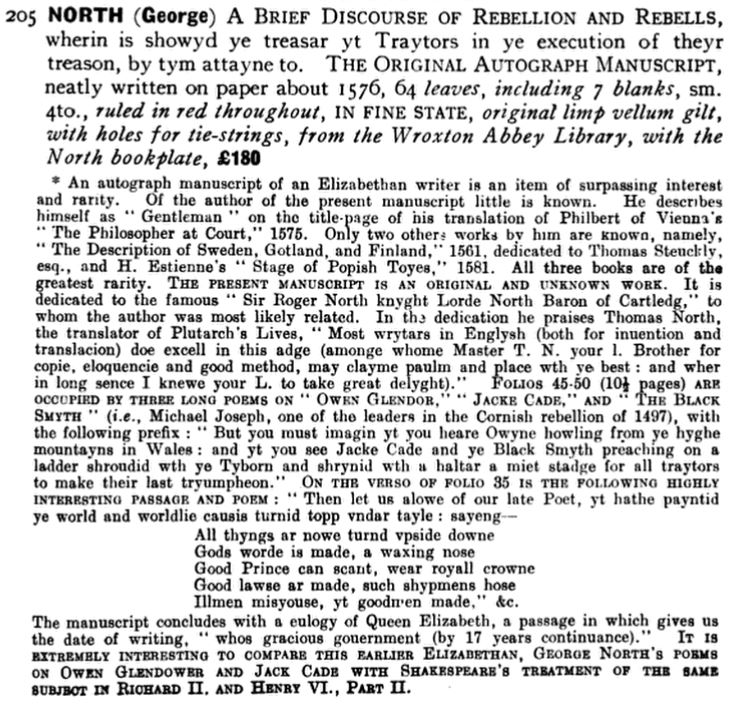 Did this obscure 1927 catalogue listing lead to the discovery of a Shakespearean source?

Poor Shakespeare. For centuries, people have claimed he didn't actually write his plays. Various names have been put forth as the real author of Shakespeare's plays by people who cannot believe an obscure commoner could possibly have written Shakespeare's masterpieces. While it is somewhat surprising such a person could produce the greatest literature ever written in the English language, the sheer number of names put forth as the "real" author makes the claim of any pretender all the more dubious. Shakespeare has held his own against all challengers.

But now, a new type of claim against Shakespeare's authorship has arisen – that he plagiarized his work. Actually, despite the word "plagiarize" that appeared in the headlines (including the one for this article), that is a gross exaggeration of the claim made by two researchers in a new book. The authors are Dennis McCarthy, an independent researcher who has been sleuthing around about Shakespeare for years, and June Schlueter, a professor emeritus at Lafayette College, to whom he brought his findings. And here is where we need to be fair to the authors despite the headlines. They do not accuse Shakespeare of plagiarizing any of his work. What they noticed are similarities in words and sentence structure to a virtually unknown 16th century manuscript that led them to believe it provided inspiration for some sentences in various Shakespeare works.

This is how the story unfolded. In his research, which must have been extensive, McCarthy came across a description in an old bookseller's catalogue as obscure as the work which seemingly inspired Shakespeare. The source was An Illustrated Catalogue of Fine and Rare Books published by Myers & Co. of London in 1927. The proprietor was Albert Myers, a veteran of at least four decades in the book business, who somehow obtained the manuscript in question. Myers dated the manuscript to 1576, based on a comment within it that Queen Elizabeth had reigned for 17 years at the time. So, the manuscript had been hanging around somewhere for 350 years when Myers put it up for sale.

The manuscript was written by George North, a minor official in the court. He wrote three obscure books that were printed, served as Ambassador to Sweden, and little else is known of him. Birth and death dates are missing. It is only known that he was active at least from the 1561 – 1581, based on the dates of his three published works. The title is A Brief Discourse of Rebellion and Rebells, wherin is showyd ye treasar ye Traytors in ye execution of theyr treason, by tym attayne to. The dedication mentions Thomas North, perhaps a relative, who translated Plutarch's Lives, itself an inspiration for some of Shakespeare's material. George North's manuscript is an apology for the monarchy. It describes the terrible but well-deserved fate of some traitors and includes a couple of poems.

While the subject matter of the manuscript would not have grabbed McCarthy's attention, one sentence in bookseller Myers' description of it did. It reads, "It is extremely interesting to compare this earlier Elizabethan, George North's poems on Owen Glendower and Jack Cade with Shakespeare's treatment of the same subject in Richard II, and Henry VI., Part II." North's manuscript ended up in the British Library, and apparently no one, until McCarthy, took up Myers' suggestion to compare North's poems to Shakespeare's works. Most likely, Myers' suggestion was long ago forgotten, and it took McCarthy a year just to figure out where the obscure manuscript was located to do a comparison. He found it in the British Library, not clearly described.

McCarthy had an advantage not available to Myers to undertake a comparison - software. Specifically, he had Wcopyfind, one of those programs that professors use to catch cheating, plagiarizing students. He ran Shakespeare's plays past North's manuscript and voila! He found similarities. He did not find whole sections copied verbatim, the way students copy. He did not even find complete sentences. What he found were combinations of words, including some rarely used, that appeared in North's work also found in Shakespeare's. Sometimes, they came in the same order. He likened this to picking the numbers in a lottery. You might get one or two or three, but getting six in a row is a millions-to-one proposition. McCarthy also ran the manuscript past a database containing 17 million pages of pre-1700 works to see if possibly both authors used a common source, but found none.

Not everyone is certain about the validity of this software induced claim, but computers do have skills the rest of us lack. If Shakespeare somehow had access to a copy of this obscure manuscript, he only "borrowed" some words. And after all, everything we write uses words "borrowed" from the dictionary. Or perhaps, since we don't know what happened to George North after 1581, he is the real writer of Shakespeare's plays.