A Book to Test the Reader 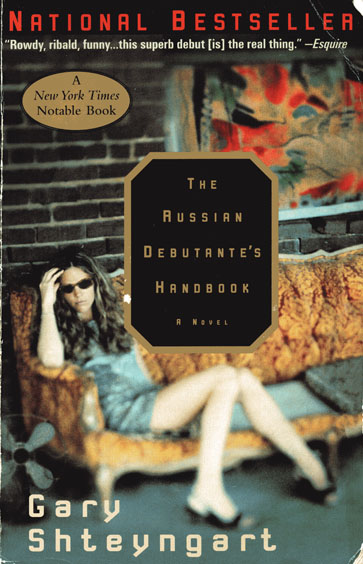 You can't tell a book by its cover.

Recently I had the opportunity to learn first hand why people are reading less. Over the past several weeks I have struggled to complete "The Russian Debutante's Handbook" by Gary Shteyngart, a book I purchased for three reasons. There is a sticker in the upper left hand corner that says "A New York Times Notable Book." There is a suggestive photograph on the cover of an attractive young woman in a short skirt. And the space between the lines was large. It also looked like a nice change of pace, in short a beach book. Once in a while I want a week or so off from War and Peace and so on. It is the story of Russian emigrants who come to America but never separate from the home land thus creating a bi-polar existence that the ultra intelligent and the wildly deranged can immediately associate with.

Well, I found out I'm old and apparently getting older fast. How so? I think the RDH is comic book characters described by someone with an 800 on their SAT verbal and a good sense of east and west. I have the distinct feeling this book is written in a new language - perhaps the ebonics of new literature, what Gunter Grasse was to post-World War II readers and J. D. Sallinger to the 1960's except more so.

This is the story of a family that escapes from Russia just seconds before Stalin's heel comes down. The chief protagonist, one Vladimir, is a 25 year old living in New York City poverty one generation later. His every act is counter to all the crummy American values that sustain us. He is infatuated with a hooker and absolutely immune to Judeo-Christian guilt. In his "relationship" he sees only her intrinsic self and trappings matter not at all. He can do this because he thinks but does not feel, perhaps the real issue that divides the generations in America and around the world today. He feels no shame and is thereby liberated from the golden yoke of "responsibility" that connects most adults. Responsibility is after all our common language, the glue that holds humans to the fly paper we call life. Take away that glue and generation X becomes understandable. Take away this glue and this book comes into focus. We, who have spent our lives trying to stay out of jail, behold a generation that is trying to break in. Ah, I understand why old people die. They just give up!