The Portable Lavater: Never judge a book by its forehead 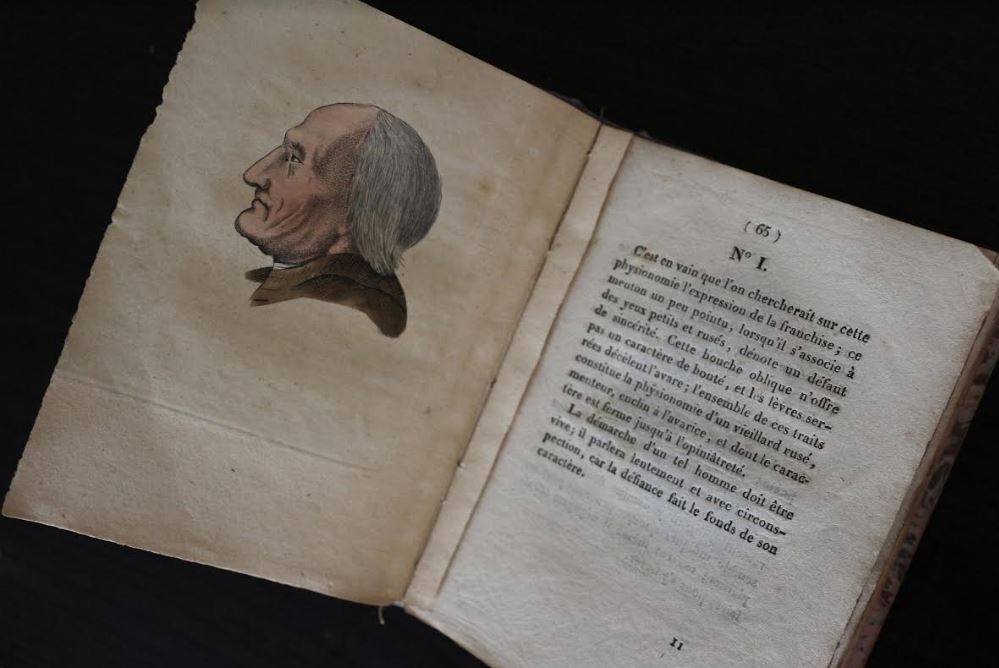 As Jamaican singer Horace Andy once sang: you see a man’s face, but you can’t see his heart—well, actually you can read a man’s thoughts on his face, providing that you know of a little book from the early 19th century, the “portable Lavater”! And you can trust what I write, since my eyebrows match my hair.

The Swiss theologian Johann Gaspar Lavater (1741-1801) is regarded as the father of physiognomy, or the art of revealing people’s characters through their facial features. “It is the science,” he said, “of what connects the inside to the outside, the visible surface to what it covers up.” His monumental work, Physiognomische Fragmente, was published in German between 1775 and 1778, and brought him fame and recognition. It came out in French in 4 in-folio volumes (1781–1803) with 693 illustrations. “This expensive edition was not the only source of the Lavater-mania in France,” writes Hans-Georg Von Arburg in La Physiognomonie entre Lumières et romantisme (DROZ, 2003). He then underlines the importance of the many adaptations of Lavater’s work published in small formats, or peddling books, in the early 19th century. “These often overlooked editions have deeply influenced the romantic French literature(...), being the missing link with German post-romanticism.”

To make it short, your being a nice man, a trickster at heart, an idiot, or a lewd woman, is written on your face—facial features are a language. This reminds us of a stinky theory in the name of which millions of people were put to death. We all bear in mind the caricatures of Jews—their hooked noses being the stigma of their “evil nature”—used by the Nazis during WWII. Physiognomy was controverted from the start, yet recognized as being part of human sciences until a reshuffling of cards in the early 19th century, which “sent it to the remote domains that were literature and arts.” (Arburg). Some authors such as Balzac were actually fond of physiognomy. It actually made its way through French society thanks to those cheap peddling books, the listing of which is incomplete to say the least—this tends to underestimate their real impact. “Physiognomy, together with Frantz Anton Mesmer’s animal magnetism and Franz Joseph Gall’s phrenology, became an institution in Paris social life at the time,” Arburg states. “In the rest of the country, where great movements of people created a climate of anonymity and insecurity, the old theological speculations of Lavater became a true code of behaviour.” I came across one of these editions the other day, entitled Le Lavater portatif (Paris, 1812). It is not listed on Gallica (the website of the National Library of France), but appears to be the fifth augmented edition of the listed second 1808 one. Everything matches, except the name of the “libraire”: the 1808 edition mentions Madame Veuve Hocquart1, while the 1812 one mentions SAINTIN, Librairie de S. M. l’Impératrice—but both are located at the same address, Rue de l’Eperon N°6, Paris. Our text—largely abridged from the 1775 edition—is the same as the 1808 edition (except for the added “life of Lavater” or “the portrait of Lavater by himself”) and the engravings are identical although redrawn—maybe the engraved plates were missing or damaged? This is a charming in-12° book illustrated with 33 coloured portraits accompanied by physiognomic descriptions.

“In vain would we look for honesty on this face,” reads the first portrait (see picture). “This slightly pointy chin together with those small and cunning eyes proves a lack of sincerity. This oblique mouth offers no trace of generosity while the pursed lips betray avarice.” Closely looking at the portrait before reading the description will reveal the impact of the latter on our perception. It’s just like looking at the portraits of people introduced to us as criminals—they always look fierce and dangerous. Under other given circumstances, they might have appeared very common to us, maybe even pleasant. These are the obvious limits of Lavater’s theory—it relies upon crude subjectivity. One passage of the introduction of our edition—written not by Lavater but by the publisher—, is already alarming, although to be placed in its historical context. Comparing the “line of the face” of various “races” of men, it states: “It is almost vertical among the Europeans, oblique among the Asians, and much more oblique among the Africans, as induced by their respective and varying intellectual capacities (...). What is striking is that the naturalists have noticed that, except in a few cases, among the animals with a social organization comparable to ours, intelligence is linked to the line of the face. The more oblique it is, the less intelligent they are.”

The “portable Lavater” was, according to Arburg, a self-defence weapon against strangers. Let’s see if its works with well identified, and potentially dangerous, people.

1 Gallica reads: “Patronimic name: Isabelle Sara Jolly (or Joly). – Daughter of the maker of the Jolly (or Joly) punch syrup, from Brussels, whose productions she distributed in Paris. She worked with her husband, the bookseller Auguste (Léopold Joseph) Hocquart from 1803, and then took his succession around 1806. Her son Édouard Hocquart (1789-1870?) took the succession as soon as 1813.” Gallica makes no link with Saintin, listed as Claude-Auguste Saintin (17... -18...), “also commissioner in bookselling. Active in 1809 and probably earlier. Patented bookseller on Oct. 1st 1812 (patent renewed on Oct. 29th 1819).”