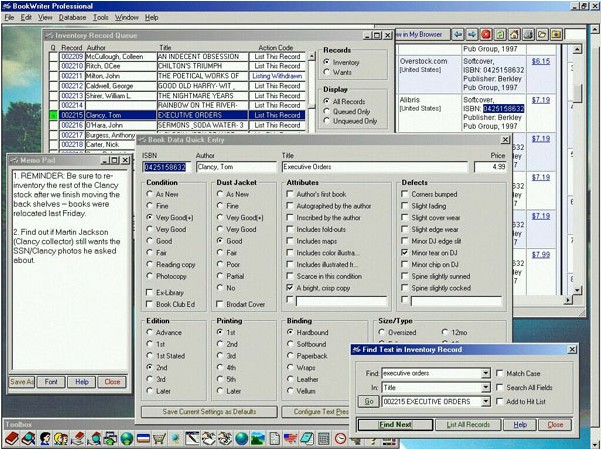 Tom is working on a soon-to-be-released new software for booksellers called BookWriter Professional, designed to make it easier to list and maintain book inventory on multiple book listing web sites such as ABE, Alibris, Amazon, Biblio, etc. The software will include features such as Inventory Management, Invoicing, Accounting, Composition, Contact Manager, a USPS interface, as well as the ability to check book pricing online and upload to multiple web sites.

How did you get started writing software for booksellers?

I created the original BookMaster software in 1987 for my mother (a bookseller). Dick Weatherford favorably reviewed BookMaster in AB Bookman's Weekly sometime thereafter and I've been at it ever since. We (Dick and I) got together in 1992 and began laying the groundwork for Interloc. I am also co-founder of Alibris (I was Chief Software Engineer from 1993 to 2001).

What are the benefits of the UIEE (which stands for Universal Information Exchange Environment) data format which you developed for booksellers, over other file formats?

The main benefit of UIEE is that it is a self-defining data exchange format that does not suffer from proprietary limitations. A great many things can go wrong in delimited formats, and XML is not universally applicable because the field sets vary and the content structure tends to be a proprietary reflection of the source database. UIEE, on the other hand, addresses the core information required in all book-related database applications in a way that is consistent, predictable, and easy to parse.