The Bibliographical World of Joseph Sabin 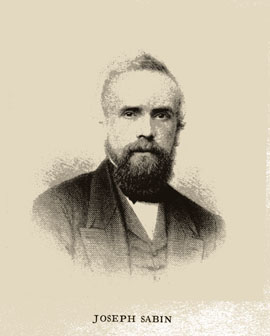 The world of books is as many sided, angled and fractioned as a kaleidoscopic image. There is no one way to see this world for in books we see ourselves and we are all different. Books are our mirrors. On shelves of old and new, read and unread, word and picture books we see ourselves. When life grows uncertain we are always present in the choices our books present and represent and we buy, sell and collect that which, directly and indirectly, illuminates our persons. Some acquire books to fill a space between the ears, others to simply create an appealing self-image. In these choices we connect with life, and allow the few who understand this, to see the person beyond the name and face.

Book dealers are an interesting variation. Some are collectors who, in self-defense, have crossed the isle to sell the drug they so much appreciate themselves. Others enter the business as a trade, see the market, and cater to it without emotional entanglement. Joseph Sabin, the great dealer of the 19th century, is in this last group. This month I discuss one of his smaller achievements, his Bibliography of Bibliography [printed in 1877], and include a separate reference work from the desk of George Watkins, who offered an updated "Bibliothecas Americana" in 1896 to keep current the ever changing bibliographic perspective. Sabin offered an alternative title for his book and I'll use it here: Handy Book About Books. It is that and it is more. Both catalogues are now in the AED and are also, as part of this article, searchable through the links provided in this article. For those who wonder, if material included in these bibliographies is available for purchase today, a link to Oak Knoll Books, the bibliographic specialists, is included. Many of these items are available in their original editions and of course many more as reprints.

In the mid 1870's Joseph Sabin was already publishing his master work the Bibliotheca Americana. Volume one had come off the presses in 1868. The final volume, no. 29, would not be published until the year Jesse Owens won four gold medals in the Olympics: 1936. He would not live to see its completion, but as its originator, he did achieve immortality. It would have suited him for he was ambitious and always busy. As is the wont of many book people he sought to place his name on page one of many things. In 1869 he began to publish the American Bibliopolist, a mostly monthly publication, which reported on auctions, books and the human drama of the book world. In 1870 John Power published "A Handy-Book About Books" which Mr. Sabin in time decided needed to be done properly. In 1877 he issued his own book under the same title.