A Book Collector on the Prowl 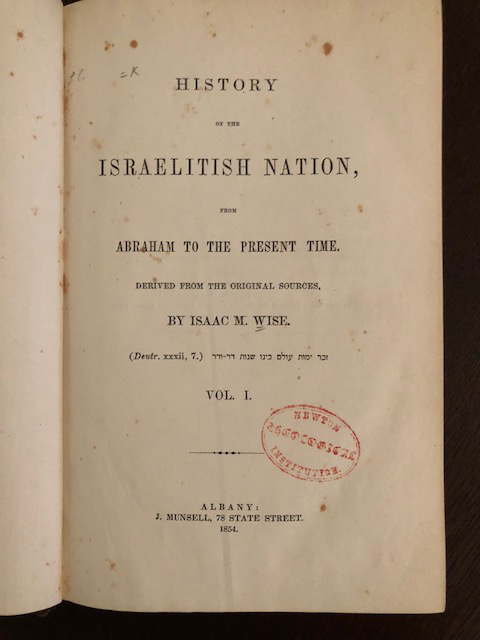 A useful but less than collectable copy

Recently I purchased an obscure Munsell imprint.  Such imprints were the production of Joel Munsell of Albany.  His was a modest printing establishment, initiated in 1834, that would run beyond his lifetime [he passed away in 1880], to be carried on into the early 20th century by his sons and heirs.  He kept, and in 1871 published, records of the material he printed during the period 1834-March, 1871 thus opening a window that has permitted collectors and scholars to better understand survival rates, be they his books, pamphlets or broadsides.  For about 1,000 of the 2,278 items whose printing history he detailed in his Munselliana, we know what he believed were the print runs.  Fortunately, or unfortunately, for the obsessed and obsessive it’s now possible to track reappearances across the Internet and compare their number to the form and print run and the numbers don’t always add up.  It has turned out that some printings with print runs above 2,000 have become all but invisible but other printings that he said were hundred or less seem to be frequently available.

Anyway, I’m one, perhaps the only one, to track his printings, and have been trying to develop a complete collection of his imprints.  After ten years, I have 400 to 500 [I’m estimating] of the 2278 publications he listed in Munselliana.  Unfortunately, I’ve also determined that he undercounted his printings because about 15% that I’ve found aren’t mentioned in Munselliana.  So I’ll guess the real number is about 2,600.  Therefore, after ten years, I’ve only found about 20% of them.

All this is simply to explain why I recently purchased on eBay:

History of the Israelitish Nation, from Abraham to the Present Time, Derived from the Original Sources.  Vol. I.  Published by J. Munsell, Albany, 1854.

To which the following disclaimer was attached:

Acceptable.  Ex-lib of Newton Theological Institution with label to spine, stamp to inner board and title.

This will be my first copy.

I’ve seen it before, both in the Rare Book Hub Database and recently, in Books for Sale.  I hadn’t bought it previously as most Munsell imprints can, with patience, be purchased for $25 to $125.  As indicated in the seller’s description they knew it was complete in one volume but priced it reasonably nevertheless.  Thank you for that.

Based on the records we have in the RBH Transaction Database we estimate its current value to be $626.  That’s probably a bit high as Eric Chaim Kline is offering a nice copy for $500.

In Munselliana the print run is listed at 2,000.  For Munsell that’s a relatively long run, his average run being 300 to 400.  As to how many copies show up in the OCLC the actual copies are 8 to which there are also later printings and electronic copies and, in Google Books a complete searchable copy.  In other words, it’s a rare book but accessible.

I’m glad to have this copy.