In San Francisco: It's Show Time! 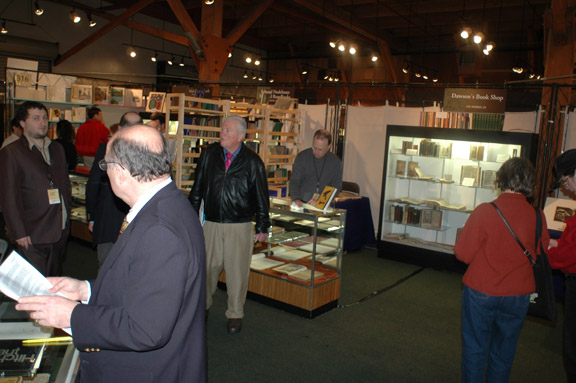 For book buyers it was the era of good feelings all over again.

When you meet a book dealer you may not think they are gamblers, and truth be told, they probably don't want to be. But when they commit to participate in a book show they commit months ahead to rent a booth, move people and inventory, guess what to bring and then hope the weather and circumstances cooperate. Sometimes it works and sometimes it doesn't. Think of them as confreres of Candid. Over the weekend of February 18 to 20 those who had committed months ago to the San Francisco ILAB-ABAA show overwhelmingly saw their ships come in as a large and changing crowd kept the isles full and the dealers busy from the Friday 3:00 pm start straight through to the Sunday 5:00 pm close. There were generally strong to very strong sales and every dealer reported meeting new collectors.

John Crichton, president of the ABAA, explained it this way. "The San Francisco ABAA book fair is the most financially accessible book fair for the entire ABAA membership and it is our most diverse book fair, where dealers of many types and means successfully exhibit, sell and buy right next to each other. It has had a remarkably strong track record over the years in attendance and sales - spread out among all the dealers - which were repeated once again this year and which give this book fair a unique characteristic not found in our New York, Los Angeles or Boston book fairs."

The pattern, set early, prevailed throughout the weekend. Dealers, per usual, were their own best customers. Buying for stock and sometimes with a specific customer in mind, they had the opportunity to buy from each other before the public was admitted. As is the norm at such shows, dealer to dealer transactions represented at least half of all sales. Then, when the doors officially opened collectors surged in and headed straight to the dealers with whom they had established relationships. Two hundred and thirty five dealers participated, but for many collectors, they were there to see only a few. Most dealers reported that they found new customers so buyers, who often went to their established contacts first, did generally make it to other dealers later. But clearly existing customer relationships were a constant among the large and multiple collector purchases at the show. Collectors preferred to buy from the dealers they knew.

The level of material brought to the show defined the scale of business conducted. Many dealers focused on the $100 to $500 transaction and did very well. Many dealers focusing on transactions at this level mentioned totals for the weekend of $20,000 to $27,000 and all were pleased. Michael Good mentioned selling a group of Hawaian material, a copy of Redwood and Lumbering in California Forests [1881] and a small archive of Clark Ashton Smith's poetry. He described the show as fun and profitable. Note: another copy of Redwood and Lumbering.... sold in the Volkmann sale on the Wednesday before the show, for $6,325. Bill Ewald of Argus Books reported 71 sales, mostly in the ephemera area. Mark Wessel of Wessel & Liberman reported 60 sales, a median selling price of $250 and a range in the offered material of from $20 to $10,000. James Arsenault of Arrowsic, Maine also reported a strong show. He sold a Gold Rush era painting for about $10,000, one of many items he sold during the busy weekend on his way to more than $40,000 in sales for the three days.