The Boston Book Fairs in November 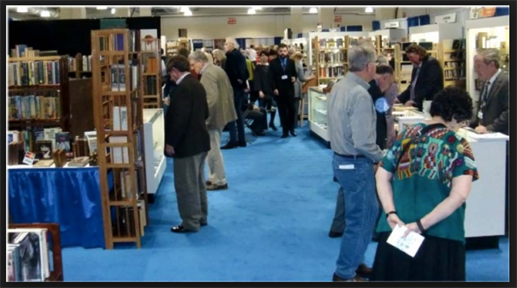 The scene at a past Boston Show

It is a right of passage that book collectors whose hearts are beating will cross the rivers, mountain ranges and fading purple loosestrife’d meadows to get to New England’s largest book fairs in Boston in November.  Rumor suggests the first Pilgrims traded their books and bibles for maize and turkey and have since been meeting annually at one venue or another trying to get them back.

This year there are two shows sharing the spotlight in Boston that Mark Twain immortalized “In Boston they ask, how much does he know?  In New York, how much is he worth?  In Philadelphia, who were his parents?"  At these book fairs the victories will go to those who know their stuff.

Boston International Antiquarian Book Fair, November 10-12 at the Hines Auditorium.  This is one of the ABAA’s principal events, the others being the New York and west coast fairs.  Members of the ABAA and the European-based ILAB can participate subject to availability.  This year 118 stalwarts will be exhibiting.  The show has a decidedly east coast feel which is a nice thing as so many of the great books, dealers and collectors have hailed from the many states in the northeast that were once the muscle of the then British colonies fight for independence from George III.  No doubt original documents, broadsides, books, ephemera and some painted images reflecting the almost 400 years that have passed since the Pilgrims first landed will be on display and available.

The other event is the Boston, Book, Print, and Ephemera Show that is staged by Marvin Getman of the Impact Events Group, Inc.  It is a one day event on Saturday the 11th that is popular with non-ABAA dealers and a few ABAA dealers who do both shows.  It’s held again at the Back Bay Events Center.  Sixty exhibitors are participating including a new ABAA member, Adam Schacter of Langdon Manor Books, who is exhibiting at the Saturday event.

The sweet spot of the Getman show is the period 8:00 am to noon because the nearby ABAA fair doesn’t open on Saturday until noon.  So come early.

The Boston International Antiquarian Book Fair {Admission $20.- for all 3 days]

These shows are very important to the trade and deserve wide support.