Comments based on a reading of Perilous Times by Geoffrey R. Stone 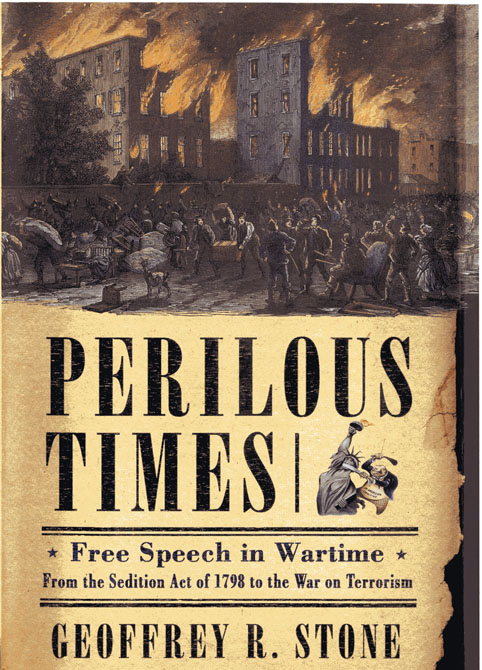 An examination of the first amendment in times of crisis.

The relationship between the law, leadership and circumstance is a complex one. Americans would like to believe that the constitution is a firm, yet flexible, document that, in the hands of the Supreme Court, is relentlessly reinterpreted to encompass possibilities the original framers could only have anticipated as principles. That the tide that ever carries the nation to higher levels of legal principles might also recede is a possibility ignored in the civics texts we waded through on our way to becoming educated. But recede it does and a book I've recently been reading brings home the fragile nature of our democracy through a review of those times when the legal authorities lost their way. The book is Perilous Times, [subtitled Free Speech in Wartime], by Geoffrey Stone. It is a cautionary tale that will not go down easy with folks that take a simple view of democracy.

It covers, in great detail, how free speech has been handled in the United States by legislators, legislatures, the executive and judicial branches in times of war and upheaval. More specifically it traces the evolution and development of the first amendment from a pale concept on paper at the nation's founding to the fundamental shield it is today. The first amendment guarantees every citizen the right to have an opinion and to express it without fear of legal reprisal. Ah, as if it was that simple.

Here is what the first amendment says:

Congress shall make no law respecting an establishment of religion, or prohibiting the free exercise thereof; or abridging the freedom of speech, or of the press; or the right of the people peaceably to assemble, and to petition the Government for a redress of grievances.

This assumes that the interpreters will be level headed and fair. When they are not the first amendment becomes an empty promise. The fundamental issue has been whether the President and/or the legislature, can in circumstances they deem appropriate suspend, reduce or revoke freedom of speech. In 1798 the Federalist controlled Congress passed and John Adams, a Federalist President, signed two laws: the Alien & Sedition Acts. The first law extended residency requirements for citizenship from 5 years to 14 thereby denying Thomas Jefferson and his Republican party the votes of a group that overwhelmingly supported them. The second gave the President the right to imprison or deport aliens suspected of activities posing a threat to the national government. Most controversial was the Sedition Act which was devised to silence Republican criticism of the Federalists. Its broad proscription of spoken or written criticism of the government, the Congress, or the President virtually nullified the First Amendment freedoms of speech and the press. Suspicion, as a basis for deportation or imprisonment, in time proved untenable because it denied the suspect the right to defend themselves.