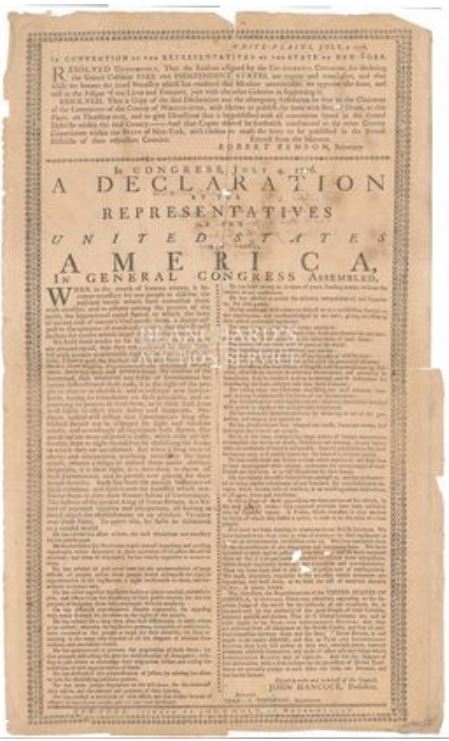 The Holt Declaration of Independence (from Blanchard Auctions website).

A major piece of printed Americana will go up for sale on November 11. It is a very rare, very early, and very valuable printing of the Declaration of Independence. It was printed in New York on July 9, 1776. However, the auction will not be taking place in New York, at least not the city. It will take place in Potsdam, New York. Where?

For the uninitiated, Potsdam is in the far upper reaches of upstate New York. Winter there begins in late July and ends in early July. It's where if you speak a second language, it's French, not Spanish. If you're going to the "big city," it's Montreal, not New York. Montreal is 100 miles away, New York City 350. Canada is a mere 50 miles north.

Potsdam is not a large metropolis. It has a population of 9,400. However, it is no hick town either. It is home to two colleges, Clarkson University and the State University of New York at Potsdam. That must be one of the nation's highest universities per capita ratios. It is also home of Blanchard's Auction Service. Blanchard's may not have the caché of a Sotheby's or Christie's, but every better known auction house on earth would love to have this item. As the listing explains, the Blanchards have known the unnamed seller for 25 years, who is "committed to our region." This is how the Declaration came to be offered in far-off Potsdam.

The Declaration of Independence was first printed for the Continental Congress by John Dunlap on the evening of July 4, 1776, in Philadelphia. Two hundred copies were printed. Twenty-five of these are known to survive. The last such copy sold at auction went for over $8 million at Sotheby's in 2000. It was in pristine condition. There were a few newspaper and other printings in the days ahead. Most were printed locally in various towns around the colonies, rather than being printed by the Continental Congress in Philadelphia. This is why most of even the early copies come a week or two later.

Blanchard's copy is one of the earliest. It is known as the Holt edition as it was printed by John Holt of New York. It was printed just five days later, on July 9, 1776. Like all early copies, it lists John Hancock, but not all of the other signers. They didn't get around to actually signing the document until early August.

Holt reportedly printed 500 copies. For whatever reason, they didn't survive. The Holt broadside printing of the Declaration of Independence was previously known in only four copies. This makes five. The other survivors reside at the New York Public Library, Westchester County Archives, Cincinnati Museum, and Huntington Library. If you want one, you better prepare your bid as you are unlikely to see another again.

What is the history behind this previously unknown copy of the great document that has been in hiding the past 241 years? Blanchard's tells the story. An inscription on the back shows it was sent with some other items to Col. David Mulford of South Hampton on Long Island on July 24, 1776, by Uriah Rogers. That pretty much tells the story. Mulford, and then many generations of descendants in the Mulford-Gardner-Buell family, kept it. This copy of the Declaration comes with eight later documents attesting to the family's continued ownership of Col. Mulford's copy. It has stayed there until the recent decision by an unnamed descendant to sell it.

How many dollars will change hands in Potsdam on November 11? This one is hard to tell. When something is of great importance and great rarity, bids can rise to unexpected levels. While this is not as valuable (though rarer) than John Dunlap's July 4 printing, it's right up there with whatever comes next. Blanchard's has placed an estimate of $500,000-$1,000,000 on the Holt copy. While I would think the price will be closer to the lower estimate, I could be totally wrong. If there are a couple of determined bidders in the room, there is no telling what the price may be. It may not quite be one of a kind, but in terms of obtainability, it sure is.

Any Declaration of Independence printed in the first couple of weeks after July 4 is likely to bring in hundreds of thousands of dollars. This being a separate broadside, rather than a newspaper printing, it is more desirable. I will not attempt to place it on a scale based on condition. You can see that from the picture. It isn't perfect, but I don't know how this compares to most other copies. It was reasonably well cared for over the centuries, but by ordinary people, not preservationists.

On the high end of recent sales, a newspaper printing sold for $722,500 at Sotheby's in 2012. This was part of a full year's run, and while newspaper printings are generally not as valuable, this was from the Pennsylvania Evening Post in Philadelphia, and its date was even earlier – July 6. It was second only to the Dunlap first printing. The first broadside printing in Boston also sold for $722,500 at Christie's in 2009, and that one came later, around July 17. A copy of a Salem, Massachusetts, broadside printed on July 15 or 16 sold at Sotheby's in 2010 for $572,500. Another Salem issue was sold last year at Heritage Auctions for $514,000.

Then there is one actual comparable to be found in the auction records, but it is not of much help in evaluating its current value. One copy of the Holt printing did come up for auction. It sold for a mere $810 at the American Art Association. Unfortunately, the year was 1920. That is not much of a guide for value a century later. At the time, American Art described it as an "excessive rarity... of which no other copy is known." Perhaps this means in another 25 years or so, a sixth copy will emerge.

Blanchard's sale contains only two items, the second being a large collection of family correspondence and some very old and unknown broadsides, estimated at $25,000-$50,000. You can check it out on their website at blanchardsauctionservice.com/index.html.