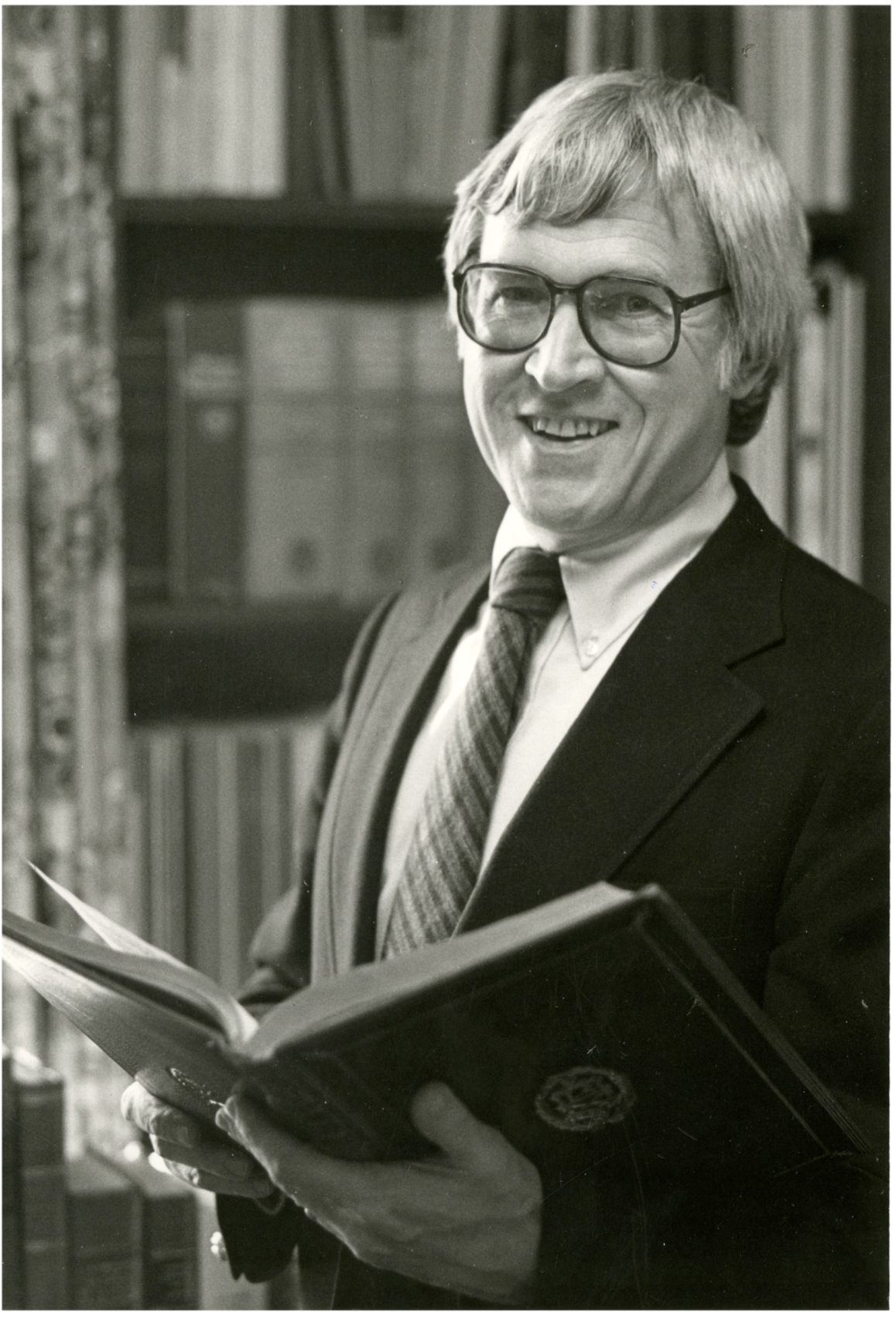 On the University of Indiana website notice of the death of William R, Cagle, former Lilly Librarian, who died in Paris last week at the age of 83, was recently posted.

We provide here his In Memoriam that is signed by Joel Silver.

All of us at the Lilly Library were saddened to learn of the passing of William R. Cagle, former Lilly Librarian, who died in Paris last week at the age of 83.  Bill worked at the Library from 1967 until his retirement in 1997, and so many of the significant books, manuscripts, and collections that are now such important parts of the Lilly Library are here because of Bill’s efforts.

William Cagle was born in Hollywood, California in 1933. After studies at UCLA and Oxford, and military service in the U.S. Army, he began his library career at the Huntington Library in 1960 as Assistant to the Librarian.  In 1962, he accepted the position of Librarian for English at Indiana University, and in 1967, he moved to the Lilly Library as Assistant Lilly Librarian, where he worked closely with Lilly Librarian David A. Randall, the first to serve in that position.  In 1975, following Randall’s death, Bill became Acting Librarian, and in 1977, he was named Lilly Librarian, a post that he held until his retirement in November 1997.

Bill was, above all, a bookman, and he excelled in his collection-building activities.  He greatly augmented many of the Library’s already strong collecting areas, including British, American, and French literature; American history; and voyages and travels, and he pioneered a number of new collecting subjects for the Library, including film and popular culture; cookbooks; miniature books; and modern fine bindings.  Many of the Library’s most popular and frequently-used collections, including manuscripts of Sylvia Plath, Nadine Gordimer, Ezra Pound, Orson Welles, and John Ford; the Elisabeth Ball Collection of Historical Children’s Materials; and the Gernon Collection of Historical Cookbooks, were among his many major acquisitions.

Bill also instituted a systematic standing order system for first editions of newly-published British and American literary works, which he initiated when he first arrived at the Library in 1967.  After a half-century of this broad and deep collecting activity, the Lilly Library now holds an outstanding collection of modern literature, which we are continuing to build.  Bill was also responsible for securing funds to establish fellowships for visiting scholars to make use of the Lilly Library collections, and the Everett Helm Visiting Fellowships and the Mendel Fellowships are now awarded annually to help scholars with their research in the Library’s collections.

Following Bill’s retirement in 1997, he and his wife, Terry, moved to Maine, where they lived for several years, before moving to Paris, where Bill had served in the Army in the 1950s.  Bill had long been a Francophile, and he and Terry fully enjoyed the cultural pleasures that Paris offered.  Throughout his retirement, Bill continued to be a devoted reader of booksellers’ catalogues, and his perceptive and timely recommendations helped us to fill a number of significant gaps in the Library’s holdings.

During Bill’s time at the Library, one of his great pleasures was the writing of the Annual Report of the Lilly Librarian, in which he recounted his most interesting acquisitions of the previous year.  Bill had an excellent eye for books, and he was always looking for the exceptional or special copy of any book that he wished to add to the Library’s collections. A selection of Bill’s most important acquisitions was described in A Splendid Gathering: Twenty-two Years of Collecting at the Lilly Library, 1975-1997 (Bloomington, Indiana: The Lilly Library, 1997), the exhibition assembled at the Library in honor of his retirement (this catalogue may be viewed online).

The use of the word “Splendid” in the title of A Splendid Gathering highlights Bill’s loftiest word of praise for a special book.  A particularly interesting book might be described by Bill in his Annual Report as a “splendid copy,” and an especially remarkable book might merit two instances of “splendid,” used to describe different aspects of the book. Only once, to the best of my knowledge, did Bill go beyond that, when, in the Annual Reportfor July 1987-June 1988, he described an especially notable recent acquisition.  I’ll let Bill speak for himself:

“It is always a pleasure to find a book someone has particularly asked for but rarely does it happen with quite such spectacular success as in the case of fine arts professor Louis Hawes’s request for Baron Zurlauben’s Tableaux topographiques, pittoresques, physiques, politiques, moraux, litteraries de la Suisse (Paris 1780-1786).  Professor Hawes mentioned, in the spring of 1987, that a facsimile of Zurlauben’s famous work on Swiss topography had been published and asked if the Lilly Library would purchase a copy.  We said we would prefer to look for a copy of the original.  That, he said, would be difficult and expensive, but if we could find one it would be his once-in-a-lifetime request.  Good fortune was with us, and a copy far exceeding our expectations was found in a Paris bookstore that summer.

The Tableaux topographiques was published in five large folio volumes and contains 400 engravings after drawings by the best French artists of the time.  The artists were sent to Switzerland especially to execute works for this project.  The copy acquired for the Lilly, with 278 of the engravings in unlettered proof state, belonged to Mary Boydell, niece of the celebrated London engraver and print seller John Boydell, and was bound for her in full red morocco by Deróme. It passed from Mary Boydell to the library of William Beckford and was in the Hamilton Palace sale of Beckford’s books (Sotheby catalogue, June 1882, item 668). It’s a splendid provenance for a splendid copy of a splendid work. Mr. Lilly would have approved.”

I think that Mr. Lilly would have approved of all of Bill Cagle’s acquisitions for the library that bears his family’s name, and he also would have greatly admired the passion, energy, and commitment that Bill brought to his duties as Lilly Librarian.  Bill was a splendid librarian and collection builder, and he will be greatly missed by all of us here at the Lilly Library.