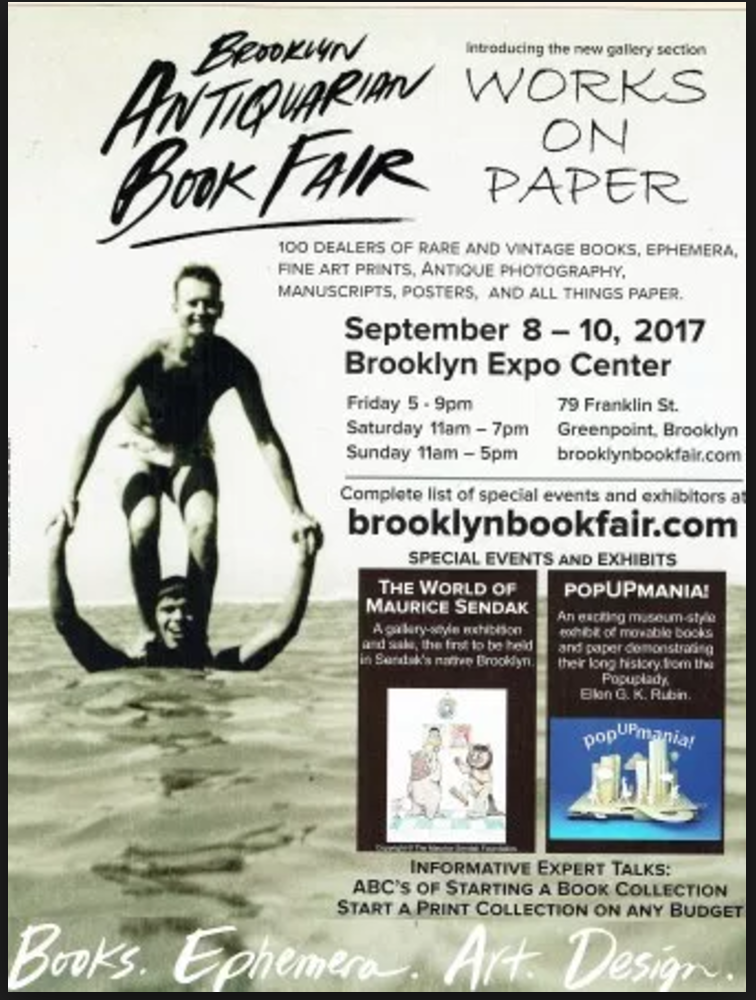 The Brooklyn Antiquarian Book Fair is now come and gone.  It’s in its fourth year and by some accounts this year moved from start-up to established as evidenced by the type of material that sold best; the more expensive objects.  During the start-up years the assumption was that material in the $50 to $200 range would best fit the audience.  This year many dealers brought better material and made money.

For this fair the September window is very good for we seem to be stretching the show calendar into something that looks decidedly year-round.  Shows, the implication is clear, seem to be becoming more important in the online/post-shop world.

Among booksellers there have long been two communities; the ABAA and everyone else.  Marvin Getman, the promotor of the Brooklyn show is hardly alone as a promotor but he is remarkably effective, combining good spaces with good timing that permit non-ABAA members to approach ABAA level success.  It’s a trend but hardly a complete story.  And many participants this year are ABAA members.

I asked Joe Fay of the William Reese Company about this as the Reese Company is also among the most powerful ABAA members and an exhibitor the past two years.

“It was a strong fair that sits well within the context of regional fairs.  We don’t look to it to rival the ABAA’s New York fair which is consistently a world-leading exceptional event.  But, for what it is, a substantial regional event, we are well pleased.”

Mr. Getman mentioned recently that the Brooklyn Fair was a complex undertaking but worth the effort. That assessment sounds right.  We look forward to the next iteration in 2018.

Link to the fair site:  https://www.brooklynbookfair.com/