Follow Up: Can a Monkey Copyright His Original Works? We Still Don't Know 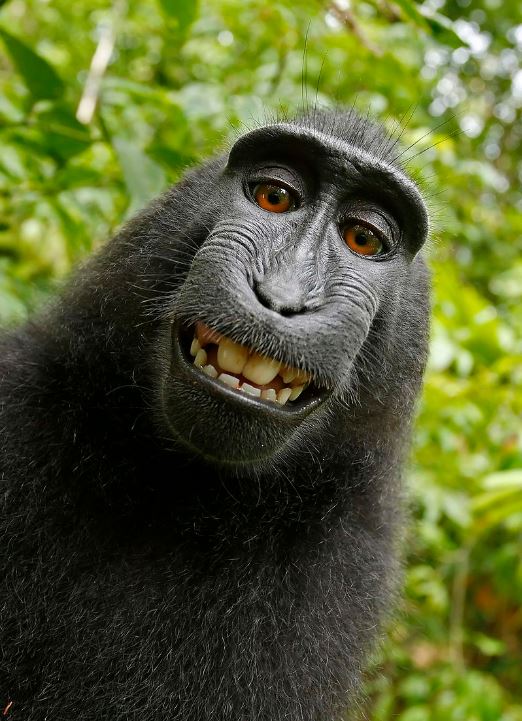 The infamous "monkey selfie" case has come to an end without answering the major question – can a monkey copyright his original works? The parties to the lawsuit have come to a settlement which leaves the burning question unanswered.

The case began almost a decade ago in Indonesia when photographer David Slater mingled over several days with some crested macaque monkeys. He then set up a camera and waited for them to investigate. One did, standing in front of the camera and clicking the shutter. Voila! the first monkey selfie.

Slater got a copyright on his photograph in his home country of England, but in America, the copyright office said no. It said that no copyright could be granted on pictures taken by animals. With the threat of copyright gone, the picture spread like wildfire across the internet, making it a very famous photograph, though Slater received nothing for his efforts.

However, an organization disagreed with the copyright office's ruling. It claimed that a photo taken by a monkey was indeed subject to copyright. Where they parted company with Slater was as to who owned the copyright. People for the Ethical Treatment of Animals went to court to establish the right of the monkey, Naruto, to own the copyright to the photograph he took.

Slater naturally disagreed, not much liking the idea that he would have to pay royalties to a monkey on photographs he thought were his own. Unfortunately, PETA was determined to make its point and fought him in court. Slater won. At least at the lower court level, the Judge agreed with Slater's contention. While acknowledging PETA's point that copyright law does not specifically say it is inapplicable to monkeys, the court reasoned that if such a bizarre result was intended by Congress, it clearly would have said so in the legislation.

PETA is persistent. They appealed. A hearing was held in front of the Appellate Court, but while awaiting a decision, the sides decided to reach a settlement. That agreement provides that Slater will donate 25% of any future revenue derived from the selfies to charities protecting the habitat of the rare crested macaques. PETA agreed to drop its appeal, and the parties went to the unusual step of asking that the lower court decision in favor of Slater be vacated. That would make it as if no court had ever reached an opinion on the issue of copyrights for original work being held by animals. The case would provide no precedent for suits involving creations such as paintings by elephants. Animals get to argue their rights anew.

The parties jointly issued a brief statement saying, "PETA and David Slater agree that this case raises important, cutting-edge issues about expanding legal rights for nonhuman animals, a goal that they both support, and they will continue their respective work to achieve this goal."

This settlement clearly represents an expected victory by Slater. The 25% contributions Slater is compelled to make are probably less than the costs of continuing his defense in court, especially since he cannot copyright his photographs. For PETA, it was a face-saving exit out of what was likely an inevitable defeat. PETA can now focus on meaningful animal rights issues, such as protection against abuse and destruction of habitats, rather than hopeless and fanciful ones such as this.