A Most Unusual Library Theft 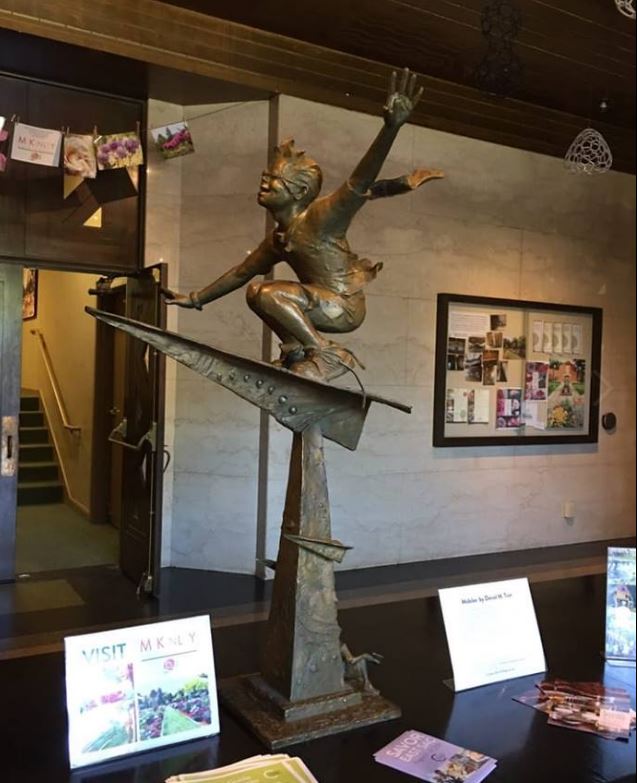 A most unusual theft took place at the McKinley Library in Sacramento on May 24. Usually, it's books that are stolen from a library. Not this time. Instead, it was a statue, a 110-pound bronze statue that was bolted to a table. Additionally, a red cart, that was likely used to wheel the statue out the door, is missing.

The McKinley Library is a small public library in McKinley Park. It is located within a larger clubhouse in the park. The statue was located in the lobby, something you passed before entering the library.

Half a dozen years ago, the library was close to being closed. Local residents banded together to raise funds to save it. The Friends of East Sacramento initially raised $40,000 to keep the library open. More has been raised since.

A separate fund raising tour of remodeled homes was held to gather the funds needed to purchase a statue. The one they purchased is called Journey of the Imagination. It depicts a boy riding on a paper airplane. At the base is a boy reading a book. The idea was to inspire young people to reading as they entered the library. It cost $7,000. The statue was created by artist Gary Lee Price and it is not one of a kind. It's from a limited edition of 250. A new one can be purchased, though the price is now $8,600.

Sometime between 1:50 and 2:15 p.m. on May 24, the thieves (likely at least two considering the weight) rolled the red cart into the lobby. Evidently, they removed the bolts from the statue before getting the cart since the bolts were found where the cart is normally kept. They lifted the statue from the table, put it on the cart, and took it away. The exact procedure is unknown as there were no security cameras in the lobby. No one ever thought it would be necessary to have a camera there.

Still, you might wonder how anyone could pull this off in the middle of the day. There must have been people walking around. My guess is the theft was so brazen no one recognized it for what it was. I imagine if I had walked through the lobby on my way to the library and saw two men placing the statue on a cart and rolling it away, I would have assumed they worked for the library and thought nothing of it. No one would steal a 110-pound bronze statue in front of the public in the middle of the day, would they?

Unfortunately, unless they are captured soon, the fate of the statue is probably the junk heap. It will most likely be sold for scrap for a tidy sum of money, though not $7,000. For the library's patrons, it is a terribly sad thought.