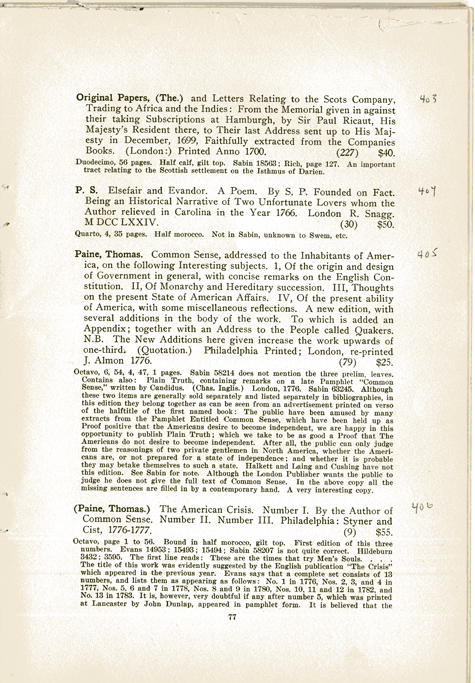 
A Declaration and Remonstrance of the distressed and bleeding Frontier Inhabitants was overpriced at $150. In fact, for more than eighty years no one had the nerve to ask so much. In 1930 he raised his price to $350. Rosenbach saw it in 1913 and again in 1917 as a $45 book. Even as late as the Streeter sale it achieved only $130. Not until the Frank Siebert sale in 1999 did this pamphlet breakout-- achieving $4,025.

He also asked $150 for Grotius' "Pills for the Delegates...," printed in 1775 --a piece that defends General Gage and attacks Peyton Randolph. Since we see no copies since we'll trust it was a reasonable deal.

He offered Alexander Hamilton's "A full Vindication of the Measures of the Congress,..." printed in 1774. Other copies have come and gone for less but this one contained corrections in Hamilton's hand. He priced it at $350 and whoever has it is very lucky.

One of the most expensive items in the Heartman catalogue is a pamphlet by Catherine Macaulay titled "An address to the People of England, Scotland and Ireland." Printed in 1775 it is the second edition but has the manuscript notes of Theodore Roosevelt. Heartman priced it at $550. Howes later described this piece as an 'a' so the high premium was for the ex-President's notes. Mr. Roosevelt died in 1919. It seems high.

So what can we say about this catalogue? The first is that pricing rare material is an uncertain enterprise. Some dealers price according to their client's ability to pay while others price according to market records. Mr. Heartman seems to have been an optimist and in some cases simply too optimistic. But if he had clients willing to pay his prices he can hardly be faulted for charging them. Then there is the subject of discounts. I don't know what arrangements he offered. His prices have the feel of being discountable in their time.

Finally, he relied on a relatively short list of bibliographical sources to document his inventory. Sabin is most consistently quoted. Church, Stauffer, Evans, Stevens, Dexter, Hildeburn and Trumbull are also mentioned. Priced records are not. He understandably steered clear of records that were inconsistent with his pricing. So we can say that experience, research and judgment on the buyer's part was very important then just as it is very important now. Know what you are buying and why. It was good advice in 1915 and remains good advice today. Today of course there are extensive priced records. In the AED alone there are more than 800,000 of them of which this catalogue is 606.