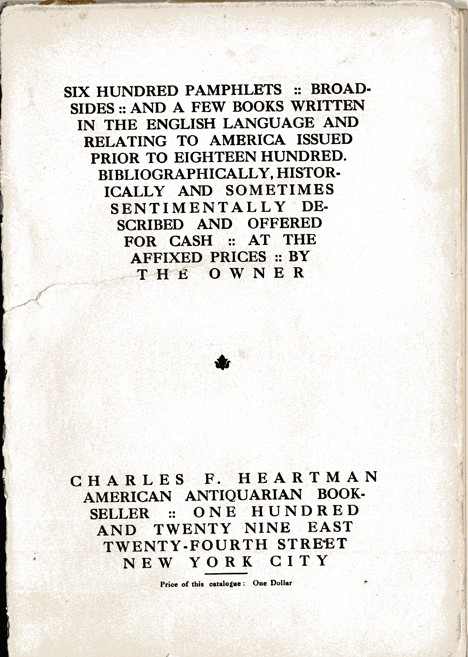 Six Hundred Pamplets, Broadsides, and a few Books written in the English Language

Most people will not know who Charles Heartman was. He was a bookseller. He also conducted auctions of books, manuscripts and ephemera primarily, although not exclusively, in the Americana field. He had a bookstore at 129 East 24th Street in New York and conducted the majority of his auctions at 612 Middlesex Avenue in Metuchen, New Jersey. His recorded career extended from 1913, his first catalogue, to 1952, his last. He came into the auction field when material was available and stayed until the money to purchase evaporated as the depression took hold. In the late 1930's he moved to Hattiesburg, Mississippi and continued to issue dealer catalogues until the end of his life. The full story of his life now sits mainly in the boxes of records and receipts his daughter gave to the University of Southern Mississippi in the 1970's. This story remains to be told.

In 1915 he issued a priced catalogue titled Six Hundred Pamphlets, Broadsides, and a few Books written in the English Language and Relating to America issued prior to the 18th century. In fact there are 606 items. It is a catalogue that can not be duplicated today. About a quarter of the items find no answering commercial references in our database of a million records.

The man was not shy about pricing and there are numerous examples of material that he priced in the stratosphere that others priced at ground level. He even managed to sometime make Dr. Rosenbach look conservative. On the other hand, many of the items in this catalogue are extremely rare if not necessarily extremely important. His rule clearly was "when in doubt, price high."

He offered "A Sermon preached before His Excellency John Hancock,..." and asked $27.50. Four years later a copy was sold in one of the Huntington dispersals for $5.50 and Lathrop Harper shortly thereafter offered a copy for $10.00. It would be 1970 before a copy would be offered at a price higher than $27.50. In 2003 Waverly sold a copy for $161. Mr. Heartman was ahead of the market.

That said, he was often "with the market." He offered a copy of the American Military Pocket Atlas [1776] that was carried by English officers during the revolution. His copy was $40. Rosenbach offered a copy for $25.00 in 1911 and another copy went unsold at the Marshall auction in 1914 but this did not deter him from offering his copy for a higher price. Goodspeed's, in 1928 offered a copy for $50 and it would be three decades before the asking price would reach $100 [Eberstadt]. Auction realizations today run between $10,000 and $15,000. He was right but he was early.

Generally the material in this catalogue isn't found for sale on the net so it's interesting to find Richard Alsop's "A Poem; sacred to the Memory of George Washington," and published in Hartford, available three times on ABE and all for the same price of $200. Mr. Heartman would have sold you his copy for $6.00.