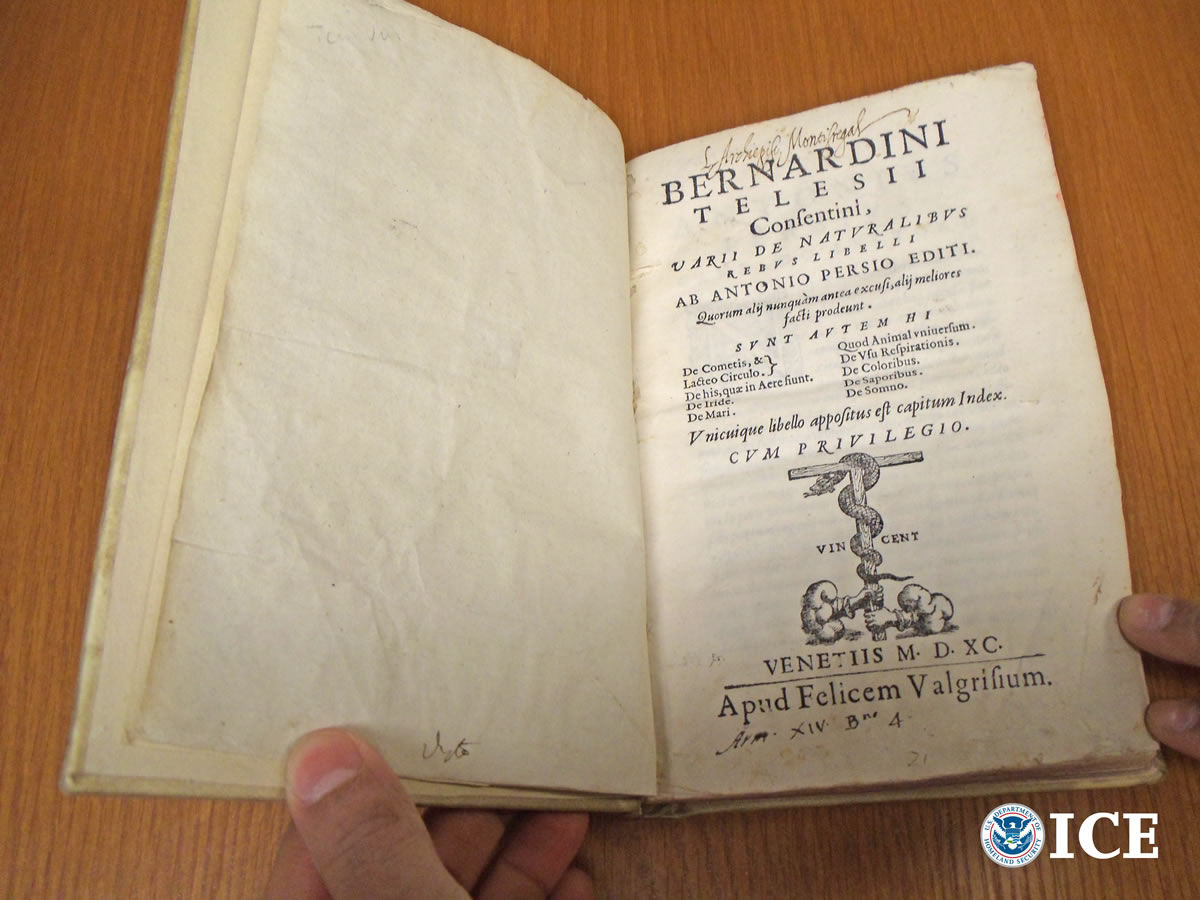 Three antiquarian books and manuscripts, stolen from Italian collections years ago, have been returned to their homeland by the Boston Public Library. They had been "acquired in good faith via reputable dealers in the latter half of the 1900s," according to U.S. Immigration and Customs Enforcement (ICE). ICE has found itself in the news lately regarding enforcement of immigration laws, but thankfully, this case is not so controversial. All parties, the Boston Public Library included, agree that repatriation is the right thing to do.

Two of the items are manuscripts pertaining to the Venetian guilds. One is known as Mariegola della Scuola Grande di Santa Maria di Valverde della Misericordia. "Mariegola" means mother rule, this being a compilation of the guild's rules, dating back to the 14th or 15th century. Mariegolas would be updated over time as new rules were adopted. The second item is a single illuminated manuscript leaf from the Mariegola della Scuola Grande di San Giovanni Evangelista. These are rules adopted by the Great School of St. John the Evangelist. It was the Boston Library's own research that convinced them that these manuscripts had been illegally removed from Venice.

The third item was a 1590 book by Bernardino Telesio, Consentini, Varii de Naturalibus... Telesio was a philosopher-scientist of the era whose theory of the world, like those of so many others, was totally wrong, and yet, despite his current obscurity, he made a major contribution to science. More specifically, he contributed to the development of the scientific method for learning. For Telesio, the major forces which determined just about everything in the world were heat and cold, and the expansion and contraction that results. Naturally, that isn't even close to reality, but Telesio's lasting contribution was early recognition of the scientific method. At the time, philosopher-scientists believed the fundamental truths of nature could only be determined by reason. Observation by the senses, if it contradicted "reasoned" theories, must be wrong. Today, all science is based on observation, with reasoned theories needing to be supported by the observed evidence if they are to be accepted. This is the scientific method, as put forth by Francis Bacon, but that came a few decades later. Bacon was more systematic in his use of observation and experimentation, and it is fair to point out that Telesio's theory of heat and cold was not based on any observed evidence. Still, he was a proponent of sensory observation as a tool in scientific learning which was an important step, his contribution acknowledged by Bacon.

The Telesio book was "stolen sometime after 1824." That's a wide range. It had been part of the library of Cardinal Ludovico De Torres (II), Archbishop of Monreale in Sicily at the turn of the 17th century. Cardinal de Torres' interest in books is attested to by his later being named Vatican librarian. He donated his personal library, and in 1593, Pope Clement VIII issued a papal bull forbidding anything from being removed from his library. Whoever stole this book, if still alive, is not only subject to legal prosecution but excommunication as well.

This book was purchased by Boston Public from a California dealer in 1980. In this case, the discovery of the missing book came about as a result of research by the curator of the Sicilian library.

An interesting observation was made by Fabrizio Parrulli, leader for the Protection of the Italian Cultural Heritage. He observed, "I would like to highlight that public and private institutions are experiencing a change of perception in terms of cultural heritage. This transition has shifted from the concept of the need to return stolen cultural property to its rightful owner, based merely on law, to a broadly shared ‘culture of restitution.'" The number of stolen artifacts out there is enormous, and this has been a painful process for innocent institutional collectors, even more so for private ones. Some remain very reluctant to part with items unless forced to do so. The Boston Public Library, and even the city's mayor, recognized this is the right thing to do, period, while expressing the hope that there are no more such stolen books. We hope so too, though that may be wishful thinking.

At least, for books, the cases are usually more cut and dried. They were generally cases of obvious theft. Looted ancient artifacts, often never part of a specific collection, pose a much thornier issue. Many were taken from their homelands, often in accordance with the laws of European colonial powers. Does a European museum, possessing ancient artifacts from its one-time colonies have a right to keep them? It was "legal" at the time, but then again, the people of those lands never consented to foreign powers seizing and enforcing laws on their lands. Righting wrongs isn't easy, particularly when those wrongs happened long ago, and righting them requires hurting a new innocent party. What we can say is the trend today is righting the older wrong is the lesser of two evils, and that is likely the best choice if we are to discourage more theft and looting in the future.