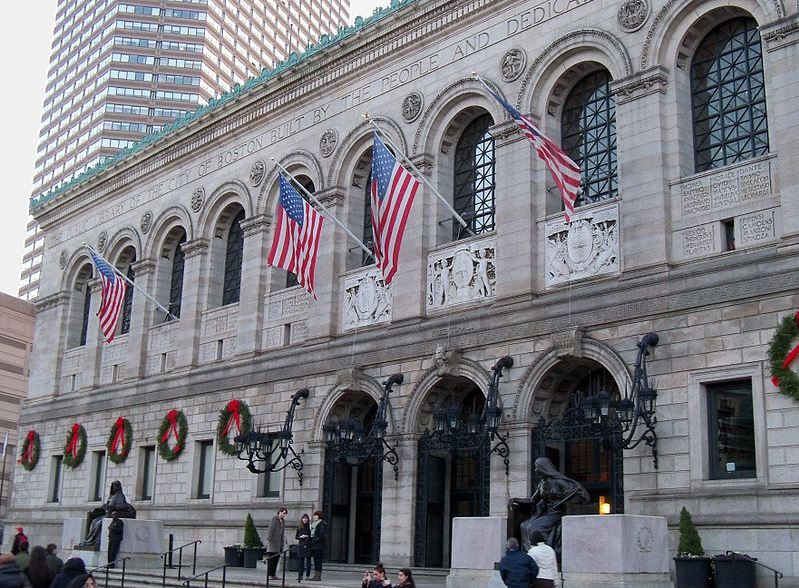 Three years ago, in the summer of 2014, an assistant in the Print Department of the Boston Public Library noticed two old prints were missing. This was not a small matter. One was a Durer valued at $600,000. It set wheels in motion that led to various investigations, the resignation of the President of the library, and now, something very good. The Mayor of Boston last month announced that the city will be investing $15.7 million in a major renovation project to preserve the library's rare book and manuscript collection.

The missing prints were not brought to the attention of library President Amy Ryan until the following spring. Months of searching for the lost prints had been unsuccessful. Ms. Ryan was not pleased with the delayed notification, nor was the Mayor of Boston when he was informed. The head of special collections was placed on leave, never to return. The Mayor called for a meeting, with there arising a dispute between the Library Trustees, who supported the President, and the Mayor, who did not.

Meanwhile, an all points search was initiated to see if the prints were still in the library. Theft seemed the likely explanation, but security at Boston Public is better than most. Many figured it must have been an inside job to escape detection. The local police and even the FBI were called in. Still, the prints department was overcrowded, much disorganized and dependent on the memories of employees for location. It was also possible they had somehow been misfiled and never located in prior searches.

On June 3, 2015, the meeting between the Trustees and a representative of the Mayor, along with the library's President, was held. Later that day, believing her situation had become untenable despite Board support, President Ryan announced her resignation. If that was not surprising enough, what happened the next day was even more so. Ms. Ryan announced the two missing prints had been found. They were discovered hidden beneath other works on a shelf 80 feet away from where they should have been.

On another track, a study had been initiated earlier to evaluate the condition of the print department. Coincidentally, it came out just a month later. The report confirmed what had now become obvious. It was highly critical, pointing out cramped conditions, lack of storage and working space, inadequate training, underfunding, with records of the collection at best inadequate. Simmons College Professor Dr. Martha Mahard, who conducted the survey, found that past librarians over many decades had been very good at purchasing and obtaining gifted valuable items. What they had not focused on was how to take care of it all once it arrived.

This brings us to the good news announced by Mayor Martin Walsh. In his announcement, Mayor Walsh said, "The Boston Public Library has the distinct honor of serving as the steward of some of our nation’s finest and most historic collections. I am proud that through this Capital Plan, we are able to invest in the preservation and care of these collections to ensure their longevity and increase public access to these cherished items."

In February, the first phase of the project began, an inventory of the 250,000 rare books and 1 million manuscripts. The second and major phase will be a renovation "with a focus on environmental and mechanical improvements to better regulate temperature and humidity control of the department’s collection storage areas, staff spaces, conservation lab, and public reading room." The library's announcement continued, "This capital project continues the Boston Public Library’s renewed commitment to improve intellectual control and custodianship of all its special collections that began with the Print Department inventory launched in 2015." Congratulations to the Boston Public Library and the City of Boston for recognizing, in these times where library budgets are often being slashed, the importance of preserving our common knowledge, heritage, and history. These are times more than ever that we need to appreciate what unites us as people.