The Future of Freedom by Fareed Zakaria 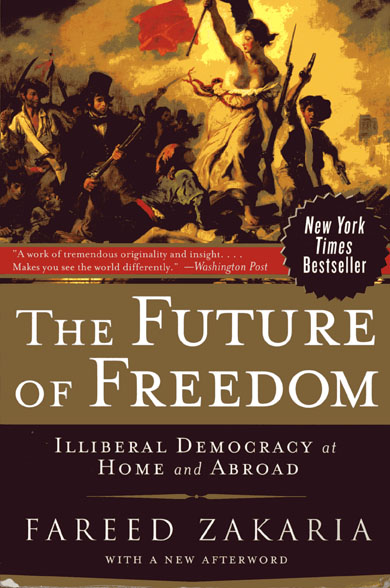 A straightforward and illuminating analysis of the world we live in.

I recently read a remarkable book, The Future of Freedom by Fareed Zakaria. It is a small book of very large ideas. It speaks not from ideology but from openness and it offers explanations for the changing political environment both in the world and in America. In newspapers and on television we hear about events. This is a book of interpretation.

This is a book that expresses the idea that, at least with respect to economic development, the past predicts the future. All readers of history and members of AE take note. Our perspective is confirmed here. As George Santayana wrote, "Those who cannot remember the past are condemned to repeat it." For those who believe this Mr. Zakaria's book is cautionary. The paperback edition is $14.95 and if President Bush had read it he could have saved $129 billion and countless lives. Mr. Zakaria makes the point that democracy requires a broad middle class. Education and per capita income are two measures he employs to establish the probability that democracy will take hold. Iraq today meets neither standard and will not for many years to come. It's a matter of numbers.

Mr. Zakaria simply has looked at those countries that adopted democracy, established who has succeeded [survived as a democracy] and who has failed and then looked at both literacy as percentage of the population along with gross per capita income. He found that where about two thirds of the population was effectively middle class and the per capita income at least $6,000 there was a high probability that democracy, if introduced, would succeed. Iraq's GDP, gross domestic product, per person was estimated at $1,600 in 2003 and oil, a substantially undistributed form of national income, a material part of it. So if you are wondering why democracy seems foreign there it's because it is. Democracy is a political development stage based on economic development and wide citizen participation. Iraq will get there someday as will most countries in the world but to try to impose democracy now, before the basic underpinnings are established, is going to be expensive, tenuous and dangerous. The test in Iraq isn't going to be whether elections can be held in January but whether in 5 years, democracy survives without foreign occupation. Americans are high minded but they also grow impatient. Mr. Zakaria's analysis suggests that the United States has not done its homework. To me it looks like another Vietnam.

Recently Mr. Zakaria was interviewed on Jon Stewarts's The Daily Show and seemed to distance himself from the factual conclusions that can be drawn from his book. In the interview he expressed hope that US intervention in Iraq might work. His own research suggests it's unlikely.