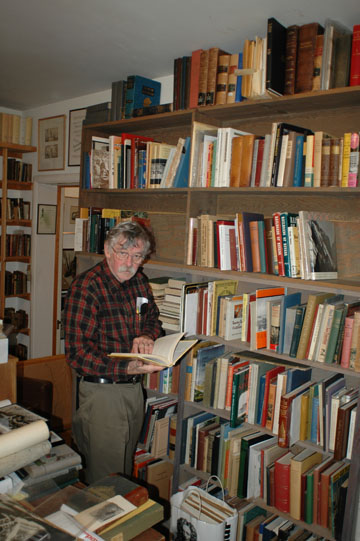 You can take the books out of the shop but you can't take the man out of his books.

Michael Good of Michael D. Good Books, at 67, is cleaning up the debris and parsing the accumulated inventory born of a thousand buys made for his San Anselmo shop since 1981. After 23 years at 35 San Anselmo Avenue, 30 minutes north of San Francisco, he and his wife Sandra, an established bookbinder, are closing their shop and moving their businesses into their home. Thus closes a chapter but not the book on Michael and Sandra Good. Mr. Good has been in the book trade for almost 40 years while Sandra has been a binder for about 20. The move, while only a few miles as measured by the odometer, is a move from a traditional retail environment into the electronically connected world of bookselling conducted from home. For the Goods it is a step away without being a step out. The schedule will be less demanding and permit them to remain active in a less committed way.

Moving the business into a smaller space requires Mr. Good to sell a significant portion of his inventory. To do this he has removed the material that is making the trip home. All else becomes available, on a first come first serve basis, on December 1st at one half of the prices he has written into the inside back pages - in many cases years ago. All material in the store, with the exception of some reference books, is available on this basis. For those who love books and who also love a bargain this opportunity requires immediate action. Sales every day will reduce the available supply. Those interested should call Mr. Good for a description of what continues to be available. The shop will close on December 31st.

Here briefly are the categories available: the humanities including literature, art, general history, European and American history, California and Western Americana. There is also a selection of Russian technical books published in the 1940's through 1960's.

Mr. Good arrived from Phoenix in 1965 and found a job with the Holmes Book Store in Oakland and in time became manager of their San Francisco store. In 1972 he went to work for Warren Howell, the legendary and prone to-be-tough book dealer. Mr. Howell was a demanding boss who oversaw a rare combination of employees who in time emerged as many of the leading book dealers on the west coast. They include, in addition to Mr. Good, Dorothy Sloan, John Windle, Ron Randall, Jeffrey Thomas, Jeremy Norman, Michael Horowitz and David Forbes as well as Jennifer Larson who has written about books and is, with her husband Jeffrey H. Marx, in the book business.