Biblio, Bibliopoly, Bibliophile: Just Who Are These B's? 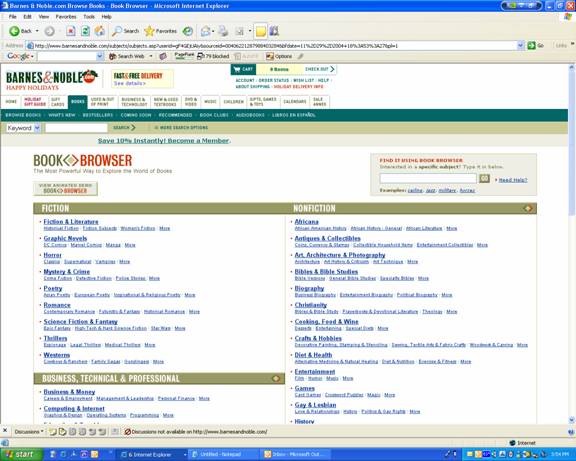 Along with new books, Barnes and Noble offers 40 million used ones.

I doubt that anyone ever intended it this way, but the book sites appear to have ranked themselves with letter grades, at least by size. The largest sites are the "A's," Amazon, Abebooks, Alibris, and AddAll. So then, who comes next? Well it just makes sense to look at the B's. Here you will find some of the book listing and searching sites that are in the next tier. They aren't as big as the A's, but there are some nice and useful sites to be found in the second letter of the alphabet. We paid some of them a visit recently, and thought you might like to hear a little about them, in case they are unfamiliar.

Barnes and Noble. In keeping with the letter grading system, it's a good thing their name starts with a "B" followed by an "A." They are right on the edge of "A's" and "B's." Barnes and Noble has one of the largest internet bookselling sites, but, unlike the bricks and mortar department where they dominate, online, B&N has always played Avis to Amazon's Hertz. Amazon got out ahead of them first, and despite whatever advantages their large local presence may afford, Barnes and Noble has just never succeeded in understanding the internet quite the way that Amazon has. Amazon doesn't dominate their market to the extent their Seattle neighbor Microsoft does, but they are clearly number one.

We won't spend much time with B&N. We reviewed their site earlier along with some of the larger sites. See http://www.americanaexchange.com/NewAE/aemonthly/article_1.asp?id=181&page=1". Barnes and Noble offers both new books from their own supply and 40 million used books (their statement) from outside booksellers. However, they do not manage their own used book program. Old book listings on the B&N website are supplied by Abebooks and Alibris. The result is that while there are a lot of old books to be found here, they are primarily repeats from the major used book sites. For the sake of comparison, I searched for copies of Mark Twain's The Innocents Abroad for this article. This is an 1869 book that is fairly valuable in its first edition, and while by no means Twain's most popular work today, has still been reprinted many, many times. I found 26 editions being offered new by B&N. Not 26 copies, but 26 separate editions, though not all were in stock. Prices for new copies ranged from $7.95 to $77, depending on the edition. I also found 572 used copies for sale. I did not examine every listing, but it appears that used prices started at $1.99. I could not tell you whether any were collectible editions as I did not have the time to look, and I'm quite certain no collector would either.

Here is the link to visit the Barnes and Noble website: www.barnesandnoble.com