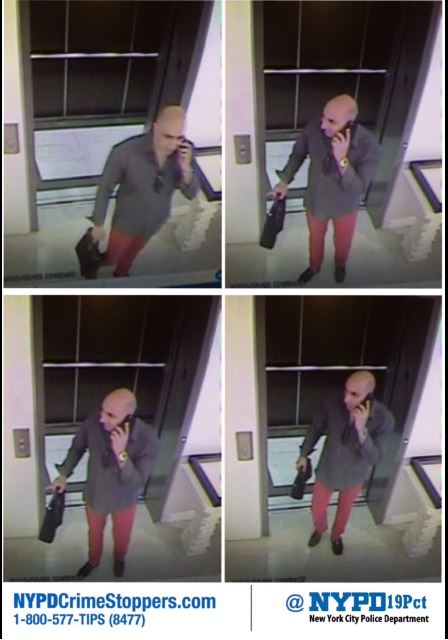 Surveillance camera footage of the thief in red pants.

New York City police recently asked for help identifying a man who stole two valuable books from a Manhattan bookseller. The crime occurred back on April 16, but pictures from a surveillance camera were only released to the public this past month. The crime took place at 3:00 in the afternoon, and the thief certainly did little to try to disguise himself or be inconspicuous. Nonetheless, police have not yet been able to identify him.

When we say he wasn't making much of an attempt to be inconspicuous, we note that the thief was wearing red pants. Perhaps this is normal attire in New York's Upper East Side, something gray and bland would have looked suspicious here? He did wear a button-down gray long-sleeve shirt, sleeves slightly rolled up. His head was perfectly bald, requiring close shaving or serious hair loss. He sported a gold watch, at least gold in color, probably digital, and in one hand carried a soft handbag, just large enough to fit a couple of books. In the other hand he held a cell phone. He is apparently talking on the phone, which is lifted to his ear, or perhaps using it as a prop to avoid having to make conversation with anyone.

The books were stolen from PRPH Books on 64th Street. The titles are Champer Duelluh Lyon and Tibertide Chyromantion Hainz. I have searched diligently but been unable to find anything about these two titles. Either they are very obscure or police got the spelling wrong. Together they were reported to be worth $20,000, a little over $15,000 for Champer, just under $5,000 for Tibertide. Certainly they are rare enough that if anyone offers to sell you a copy, the first thing you should do is ask about their provenance. And then you should call the police.