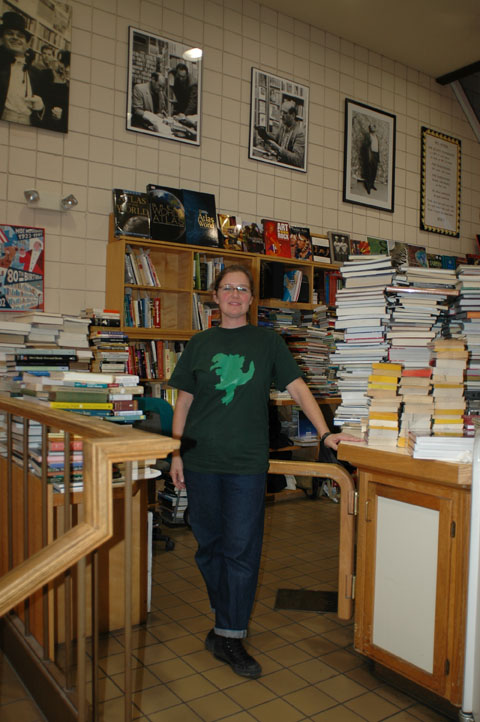 Doris Moskowitz, near the pandemonium at checkout and under her Dad's watchful eye.

While the Jefferson Airplane were singing the lyrics of Volunteers in the late 1960's just across the bay, Moe and Barbara Moskowitz, foot soldiers in the revolution, were building a book store in Berkeley that would in time become a west coast institution. It is known simply as Moe's. There are 360 degrees of book collecting and 360 degrees of book selling. But unlike geometry where every degree is equal, in the world of books each degree fluctuates and vibrates with the personalities of the players, the drumbeat of the times and the energy and intelligence of the buyers. Welcome to the world of Moe's Books on Telegraph Avenue in Berkeley, California, the Fat Tuesday of west coast booksellers where the energy survives even as the eras change.

If you are an antiquarian you have to get past the building. It's new in a 1970s between-styles way. George Washington definitely didn't sleep here. Moe Moskowitz came to the Bay Area from New York in the mid-1950s. He brought his opinions and an eclectic background as activist, anarchist, painter, violinist and picture framer with him. Within a few years he found a wife and partner: Barbara and in 1959 opened a used paperback shop. In time and after several moves the Moe's you find today at 2476 Telegraph came into being. From the beginning change has been a constant. What were first paperbacks became in time new books, used books and antiquarian material. The business, which for a while spilled over into neighboring spaces, is back at a single address albeit four stories.

This is a business that buys used books and has always bought a lot of them. Some businesses expand because the space runs out. Moe's is one of them. For a while there was Moe's Annex where the python who swallowed the donkey kept extra lunch. Today the inventory once again fits within the four walls at 2476 yet even now there are high piles of just arrived material stacked new every day on counters near the main entrance. Think of it as an Ellis Island of orphaned and used books waiting to be valued, marked and sent to the appropriate floor, section, and shelf where the daily throngs wait to paw, measure and calculate the fresh prizes and choose an armful to take home. This is a business with a mission.

Floors one, two and three are new and used books with an emphasis on newer and less expensive art books. The fourth floor is a kingdom unto itself: rare and collectable material. As in sky scrapers the valuable real estate is on the top floor.