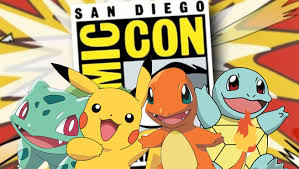 July has come to a close, and this means a couple things. One, summer’s almost over. And two, Comic-Con International in San Diego just ended. This year marked the 47th year of the comic-based extravaganza. While it started from humble roots in 1970, with an event that drew about 100 people, Comic-Con has become a pop-culture phenomenon, celebrating not just comic books themselves, but many related and tertiary subjects. Comic book influence on the movie and TV industries is huge. And ever since Hollywood took to bringing graphic novels to the silver screen, comics have gone mainstream. Recent conventions have drawn over 130,000 visitors, with many celebrities in attendance either providing Question & Answers, promoting new work, or simply to enjoy the show.

Comic-Con 2016 will likely be remembered as the year of Pokémon Go. Released two weeks before the show, the augmented reality game on your phone quickly became one of the most popular mobile games ever, amassing more downloads in its first week than any preceding app or game, and in twenty-two days reaching an estimated 50 million downloads, more than Instagram or YouTube in the first six months of 2016. Comic-Con’s core demographic aligns pretty much perfectly with that of Pokémon Go’s, and this year, Pokémon made big waves. An event originally planned for 500 people was moved to Comic-Con’s equivalent of a “main stage,” accommodating 6,000-7,000 people, and became the convention’s last major event.

It remains to be seen how comic book stores that exhibited at Comic-Con 2016 did in terms of financial success. Comic-Con is known to outside observers for its celebrity question and answer panels and the elaborate costumes show-goers don of their favorite comic book, movie, and TV characters, not as a place to buy comic books. However, those who attend the show aren’t outside observers, and it’s hard to imagine passing up the opportunity to have your stock on display for such a large concentration of your target audience.

We cover Comic-Con at Rare Book Hub because at the core of it, Comic-Con is based on comics, a type of work on paper. They are easily the most popular collectible today falling under the umbrella term works on paper. And though they may not carry the prices that many older books and manuscripts do at auction and with dealers, they’re catching up. According to the website Comic Book Resources, three distinct comic books have sold for at least $1,000,000, with the holy grail, “Action Comics” #1, featuring the debut of Superman, breaking the $1M mark on four separate occasions. In 2014, a copy sold for $3.2M. As the market grows and comics gain in popularity, the number of items reaching this vaunted threshold will only increase.

We already know where comic fanatics and super geeks will be next July. They’ll be at Comic-Con 2017.