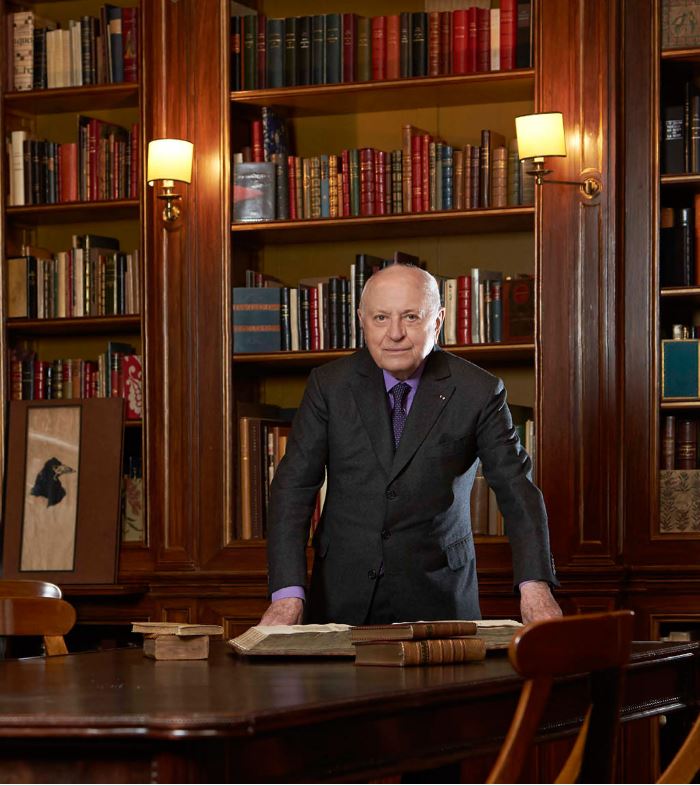 The second part of what may well be the greatest book sale of the 21st century so far has been scheduled for November 8 and 9 this year. It will be held in Paris at the famed auction site, the Hotel Drouet, hosted by Pierre Bergé and Associates and Sotheby's. This is the sale of the library of Pierre Bergé himself. Bergé is the former fashion company executive and longtime partner of Yves St. Laurent, now heading the art and book auction house that bears his name. The first sale, held last December, brought in almost €12 million (US $13 million) in sales. Four or five more sessions are planned to be held starting in 2017 before the sale is completed.

Bergé was the chief executive of Yves' St. Laurent's enormously successful fashion house. It enabled him to put together his fabulous collection of art and books. However, his love for books goes back long before the chance encounter with Yves St. Laurent which led to their forming the fashion business under St. Laurent's name. As a young man, Bergé was an avid reader. His love of reading brought him to work as sort of a runner in the book trade almost 70 years ago. In turn, he put together a small library of some of his favorite authors. While that meeting with St. Laurent quickly turned into a business, pulling Bergé away from a career in the book trade, at least until many years later, it never dampened his love for books. In the ensuing years, equipped with the type of money needed to build one of the finest collections in the world, Bergé formed the great library he possesses. But now, at the age of 85, he he has determined it is time to put most of the material out for the next generation of collectors.

We will not know precisely what is included in this session of the auction until the catalogue is published in September, but some information has been released. It appears that there will be 380 lots. Many of the writers are French, as in the past auction and not unexpected considering Bergé's nationality. However, he by no means limited himself to collecting French authors, so other European, English, and American writers will be included. Among the items expected is a manuscript of the Marquis de Sade's last novel, The Secret History of Isabella of Bavaria. Also offered is a manuscript of Gustave Flaubert's Over Strand and Field, recounting his 1847 tour along the Loire River and coast of Brittany with Maxime du Camp. It was not published until 1886, six years after Flaubert died. A Flaubert manuscript brought the highest price - €587,000 (US $640,000) - in the first Bergé auction.

Other celebrated French authors represented, often in copies autographed to other writers or other notable copies, are Balzac, Hugo, Mallarmé, and Baudelaire. A rare author's annotated copy of Promenades dans Rome by Stendhal is included. Non-French writers to be found include Tolstoy, Goethe, Wilde, Wordsworth, Shelley, Poe, Dostoyevsky, Byron, and Marx.

Assisting Bergé's firm and Sotheby's with the auction are book experts Stéphane Clavreuil and Benoît Forgeot. Bergé has little need himself for the funds the auction will raise. Instead, they will go to a foundation he and St. Laurent set up and for aids research.