Lincoln: You can collect him but you can not own him 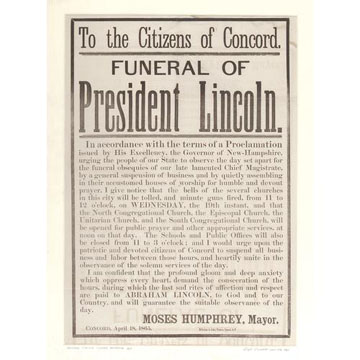 The assassination of Lincoln prompted a national outpouring of mourning and tributes.

The second Lloyd Ostendorf Collection of Lincolniana comes under the hammer at Bonhams & Butterfields on November 23rd, 2004. The first set was sold to a museum in 1986 and this is a collection he subsequently built. There are 209 lots.

Lloyd Ostendorf, who lived in Dayton, Ohio, spent almost seventy years collecting material relating to Abraham Lincoln, the 16th President of the United States. Mr. Ostendorf was a collector, scholar and photographer whose book, Lincoln in Photographs, is an important reference for the field. Mr. Ostendorf also wrote, edited and contributed to many other volumes relating to Lincoln.

He started collecting early in his life and early in the second cycle of "Lincoln collecting." The first wave of important collections of Lincolniana had come to the market a full generation earlier. He bought his first material in the 1930s and focused on the photographic images that were invented during Lincoln's lifetime. In the President's changing image the story of a nation under siege is visible though the wear, anxiety and fatigue in the man. Much of what we "feel" about the Civil War today we "know" from Lincoln images.

In 1986 Mr. Ostendorf sold a substantial portion of his collection to the Lincoln Museum and promptly began to reinvest the proceeds in additional Lincoln items. Over the ensuing years this second collection emerged as an eclectic combination of both important and peripheral images and documents, an assortment of Lincoln images in life, photographs of an array of front and back row players and a variety death and funeral related pieces.

For starters let's consider an image of Lincoln's horse, "Old Robin." Mr. Lincoln sold his horse in 1861 for reasons that aren't clear. This is lot 9017 and is estimated at $300 to $500. Not every lot is terribly expensive. The cost to get from horse to rider varies.