Coming to Auction at Auctionata: A Near Complete Run of La Gazette du Bon Ton 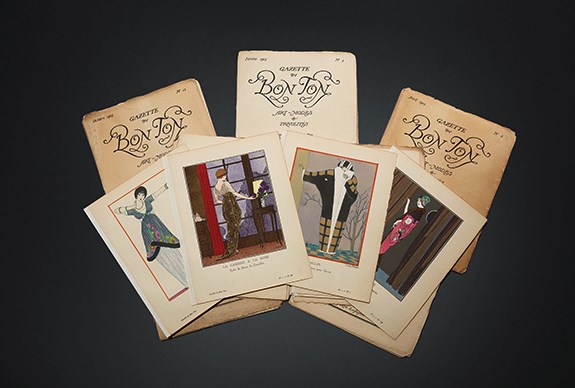 This February, Auctionata, the Berlin-based auction house, is giving collectors of fashion something to be excited about. They’re hosting a sale of Rare Books & Ephemera, and its headline item is a gem. Published from 1912 to 1925 in France, La Gazette du Bon Ton was a small but important fashion magazine that featured many of Paris’ top couture houses as well as writing by many established writers. A near complete set will be for sale at the February 9th auction.

La Gazette du Bon Ton was always an exclusive publication. To distinguish itself from other mainstream competitors, it was only available to subscribers (and carried a steep price of 100 francs per year, or over $400 in today’s valuation) and published on fine paper. It signed exclusive deals with seven of Paris’ top couture houses—Cheruit, Doeuillet, Doucet, Paquin, Poiret, Redfern, and Worth—with the goal of elevating fashion’s status to that of high art. Because it was of limited availability at the time of its printing, complete sets are exceedingly rare. This lot is an excellent starting ground for anyone looking to complete the full run.

Another highlight of the sale is an extremely rare edition of Alfred de Vigny’s Daphné in Gruel binding with a collotype of one of the previously considered lost pages of his original hand-written manuscript. Only 13 appearances of any edition appear in the Rare Book Transaction History. Other items shown in the auction preview include Marquis de Lafayette’s copy of Rural Improvements from 1775, and a first edition of Sinbad the Sailor and Other Stories.

The sale will take place on February 9, 2015 at 12 pm EST with bidding available live, over the phone, and on the web. The auction catalogue is not yet available for browsing online. The auction preview is available here with registration for bidding open now.