A Renewed "Half Life"<br>Half.com Lives 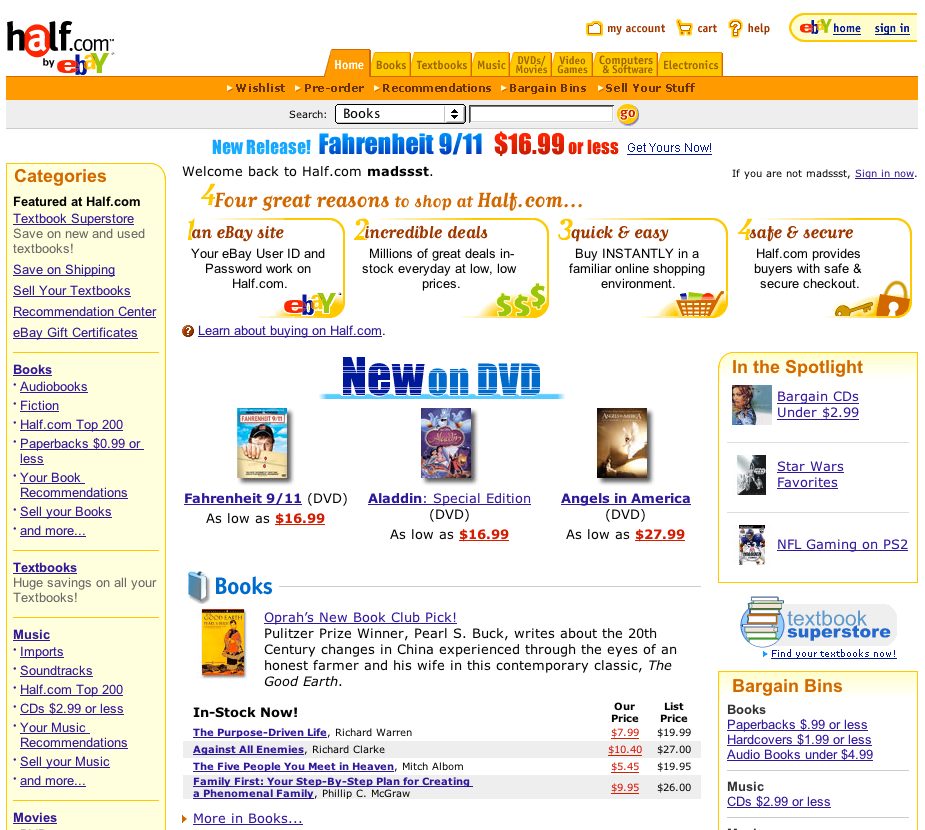 A look around the half.com home page reveals books are an important part of this site.

In our reviews of the major bookselling sites, we have assiduously avoided looking at Half.com. Why would we? Half.com has been a marked man, a website on death row, with its date of execution formally set. Originally, parent eBay just wanted to get rid of this unloved stepchild, purchased from others a few years ago. July was set as the final date. It encouraged everyone who sold books (and other things) on Half to move their listings to eBay stores, the natural child, loved by the parent though not necessarily by all of the booksellers. The migration was slow. Parent eBay figured sellers needed more time, so they postponed the execution until October 14.

But, something happened along that final walk to the chamber. The sellers did not go quietly into the night. In fact, they let eBay know how little they appreciated the closing of Half.com. Evidently, they voiced their opinions in meetings with management, and the message boards lit up with biting comments. Then, suddenly one day (Sept. 23, specifically), eBay sent out a message to its sellers totally reversing its stand. In it they said. "In our last announcement earlier this summer, we said that Half.com would be closing on October 14, 2004. We have decided NOT to go forward with this plan and will keep Half.com open indefinitely" (emphasis theirs).

What happened? Why the change? Did the pleas of their sellers finally get through? Personally, I doubt that was the reason. They have been speaking up for a long time without eBay listening. More likely this was a response to the old saying "money talks," rather than sellers talk. In the letter, Vice-President and General Manager of Half.com Mike Aufricht said that the attempt to shift sales to eBay had not reduced business at Half. "In fact, loyalty to Half.com has remained strong as we witnessed yet another outstanding back-to-school season on Half.com." He goes on to say that sellers have been arguing to keep Half.com alive, and that, "Your input, as well as the data and experience we have gained during the transition efforts, are the basis for our decision to keep Half.com open." Again, I suspect it was the "data and experience," a likely euphemism for "cash," that was the key factor rather than the "your input" they ignored for so long.

Why they didn't see this sooner is both unexplained and hard to explain. Perhaps patent infringement claims pertaining to Half.com's software was the major reason for eBay's plan to jettison the site. Clearly it was an issue. Maybe it was more a desire to strengthen the core eBay name that motivated the earlier decision. Whatever, someone finally looked at the sales at Half and the seller loyalty, and decided not to detach the milking machine from the cash cow. We can't say for certain that the decision is permanent. However, they do say, "There will be no substantive changes to Half.com in the foreseeable future," and, "Going forward, we will invest in both platforms" (Half and eBay). Sounds like Half.com will be sticking around awhile.