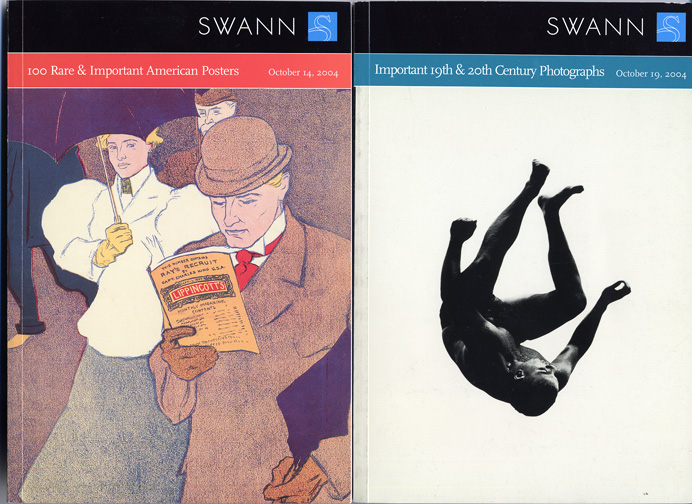 These are two of the five sales Swann is holding in October.

At Swann's this month it is a return to the busy pace of the 1950s when auction houses held sales every week and frequently multi-part sales through the week. Books, manuscripts and ephemera are these days more broadly defined to reflect changing tastes but for the collector, dealer, librarian and tire-kicker there are many things to consider this month. Here is a rundown of the scheduled sales.

On October 7th Swann conducts its second recent auction of The Work of Al Hirschfield. This is artwork relating to 20th century American entertainment.

On October 14th there is a sale of 100 Rare & Important American Posters. Images bring book collections to life. Many collectors purchase maps to display. Posters are equally effective.

A sale on October 19th of Important 19th & 20th Century Photographs provides the image collector with more choices. Photographic images often tell a different story than the printed word. Lot 278, Jack Kennedy campaigning in Ona, West Virginia, in 1959 provides a sense of the man and the times. A hundred related Kennedy titles on a shelf will not as effectively convey the uncertainty of his election campaign. There are several hundred arresting images in this sale. The Kennedy photograph is only one of them

An extensive catalogue of Printed & Manuscript Americana, 464 lots in total, comes up on October 21st. There is a nice Lewis & Clark section including a broadside extra [Lot 239], dated October 9th, 1806 announcing their return. It is quite rare and will be expensive. There are also 35 lots relating to the American Revolution, 363-397, that are interesting.

Finally, on October 28th, there is a sale called Magic. This is an annual sale and a required event for those involved in this field.

The Americana and Magic sales will be searchable in our upcoming auctions in the next week. For the other sales visit Swann online at www.swanngalleries.com Select the View Catalogue option and then select a sale to view.