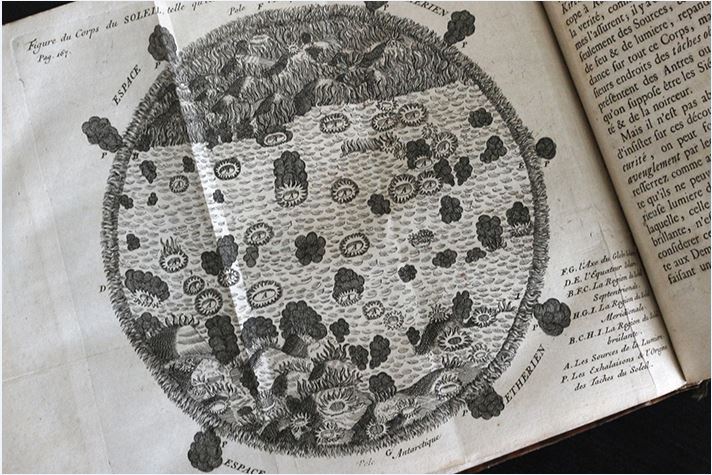 Enhanced view of the sun as seen through a telescope.

The second engraving added to the book is quite fascinating. It represents the surface of the Sun “as it was discovered by Kercher and Scheiner, through the great telescope at Rome, in the year 1635.” Father Scheiner is another suspicious religious who “observing the sun through a magnifying glass, (...) suddenly noticed some dark spots at the surface,” reads the Encyclopédie (Yverdon, 1775). This discovery was “contrary to the philosophical principles of the time,” since it denied “the incorruptibility of the heavens.” But it suited Swinden’s theory. Indeed, our scientific theologian had to explain where the “darkness” evoked in the Bible could be found in the seat of universal brightness! “As for the ‘darkness’ in the ‘chains’ whereof (the devils) are said to be ‘reserved’, I take it to be an objection against me of little weight,” he says casually—still adding the engraving of the map to his book. He claims that the “dark spots” are “dens or caverns; which therefore may not irrationally be supposed to be the proper seats of the blackness or darkness.” If this rational argument does not convince you, bear in mind that “by darkness may well be understood that blindness, with which, as with chains (the devils) are fettered, that they cannot approach the glorious light of Heaven.” Any further questions?

The Universe Is A Stage

There’s something irresistible about this map and this naive representation of the Universe. Though amusing, they make us painfully aware of what we’ve lost in the course of time. “It is, I confess, the peculiar humour and infelicity of this, to be sceptical beyond the examples of foregoing ages,” deplores Swinden, “and the men of it are very apt to scoff at that which they have not some experimental or rational account.” It is so exciting to imagine the scary and mad faces of terrifying devils and sinners popping out these dark spots, surrounded by the eternal flames of damnation, and shouting in pain as the worm of remorse gnaws their entrails! Just like a painting by Jerome Bosch, it touches some remote part of our Judeo-Christian subconscious. But, whereas it used to scare our ancestors to death, this vision of hell is more of a lost paradise to us. People like Swinden saw the world as a “beautiful fabrick (sic)”, a holy stage that had been created in six days’ time, some 6,000 years ago. The almighty play writer had put Man at the centre of this tragi-comic play, so everything was here for a reason, and only our limited understanding of His divine handiworks created uncertainties. As proven by Swinden’s book, science and religion are not necessarily opposed. Yet, the more our knowledge increases, the more the Earth resembles a ship that has lost her anchor, drifting away in an unfriendly and cold universe. Guess it is comforting to feel that God might be closely watching over our shoulders, even if the price to pay is a potential eternal trip to the dark dens of the Sun.

Suffering from cancer, the poet Miss Deshoulières (1633-1694) begged God to deliver her from Reason—which she referred to as the seat of her pride—so that she might be able to believe beyond doubt and thus partly relieve her pains. The French poet Chaulieu (1639-1720) even calls reason “the poison that corrupts righteousness (...) and the truthfulness of our hearts.” The theologians have always asserted that a good Christian should not think too much. How convenient! When they run short of arguments, the theologians leave it to God. Théophile Imarigeon Duvernet (1734-1796), in his critical Histoire de la Sorbonne (Paris, 1790), reminds us that, according to them, “it is better to believe than to think; to be a good Christian than a bel-esprit.” Intelligence is then the enemy of Man and of the theologians. In a word, blessed are the dumb.