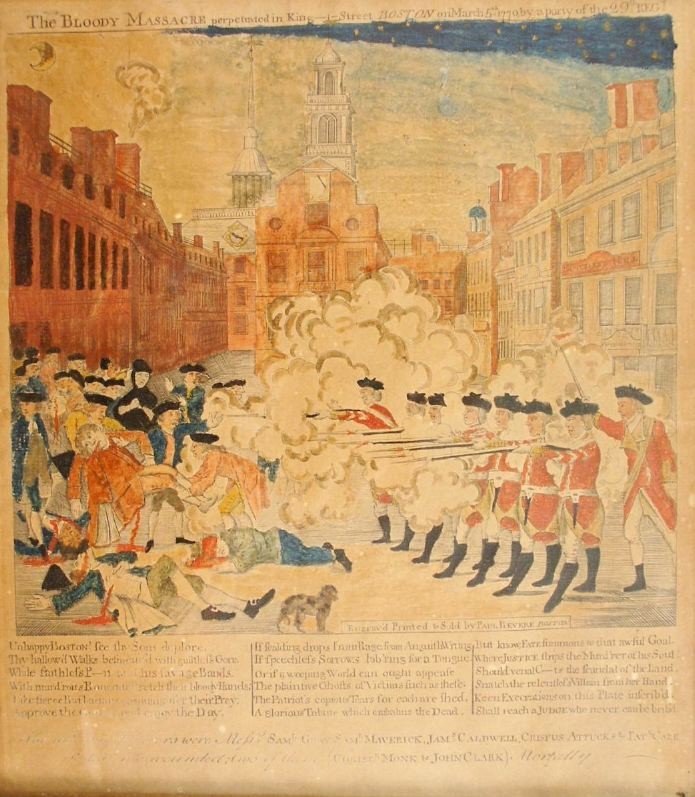 The Bloody Massacre in King-Street Boston on March 5th, 1770.

At the Dedham, Massachusetts auction house Grogan & Co. the Boston Massacre was recently reenacted. This time the red coats were on paper and instead of shots there were bids. In fact ten telephone bidders, all pre-qualified as being willing and able to pay at least seven times the high estimate, were allocated phone lines to bid from remote locations. In the room waited the eventual winner as well as the under-bidder. What were they after?

It is called "The Bloody Massacre in King-Street Boston on March 5th, 1770." It was engraved by Paul Revere and then hand colored. It is an arresting and important image from the estate of Elizabeth Bradford Storer, a spinster, who was active in the Daughters of the American Revolution and also a patron of the arts. The principal parts of her estate were auctioned this past spring while the contents of eight trunks, deemed less important, were set aside for a later sale. When these trunks were then examined one of Grogan's appraisers identified the massacre image at sight.

In their recent catalogue description here is how Grogan described the lot.

PAUL REVERE
(American, 1735-1818)
THE BLOODY MASSACRE, PERPETRATED IN KING STREET BOSTON ON MARCH 5TH, 1770... engraving with hand coloring on laid paper; 10 1/4 x 9 1/8 inches; Property from the Estate of Elizabeth Storer, Needham, Massachusetts;
Note: According to Clarence S. Brigham "Paul Revere's Boston Massacre is the most desirable of all of his engravings. It is the corner-stone of any American collection." The engraving was first distributed by itself as a handbill and later was incorporated into newspaper accounts of the incident. A cut down version of this print was used again by Revere in 1775 when he was commissioned to engrave Massachusetts paper money in 10, 12 and 18 shilling notes. According to Brigham, the original copper plate used is now housed in the he Archives Office at the State House in Boston. (Clarence S. Brigham, Paul Revere's Engravings, 1954, pp. 41-57)

The description appears to be consistent with the first printing but there was a re-strike of this image in 1832 and the auction house sought, without specifically mentioning it, to allow for the possibility this example was the re-strike. They could not preclude it.