Libraries and Booksellers Take On the NSA 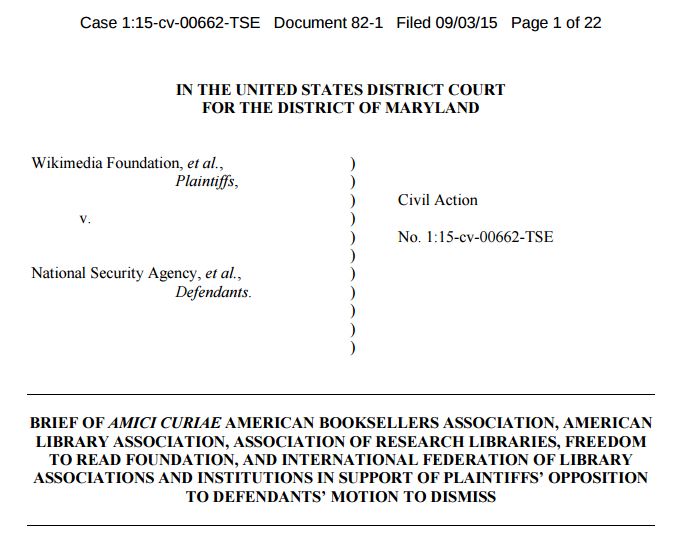 Libraries and booksellers go to court to protect their patrons' privacy.

The battle against spying by the NSA (National Security Administration) recently brought organizations representing libraries and booksellers into the fray. Libraries and booksellers have often found themselves fighting to protect the privacy of their patrons' reading and buying habits. In the past, this has pertained to printed, physical books. Today, much reading and buying takes place electronically, be it through orders placed online or through electronic books. The result is that electronic surveillance now fits within the purview of concerns for book people. If before they felt a duty to protect their clients from the government snooping on who was reading what, today that duty equally applies to electronic reading and purchasing habits.

As we all now know as a result of leaks, the U. S. government does a massive amount of spying on communications between America and overseas. The modus operandi appears to be to gather enormous amounts of information, run it by keywords that the government believes terrorists use online, and use those matches to determine who may want to do us harm. However, these are all random interceptions, not based on reasonable suspicions of the people whose communications are intercepted. Neither is there any attempt to get a search warrant from a judge. It is all a massive fishing expedition, with the belief being that if the nets are set far and wide enough, fish are bound to get captured. A few of those fish may be sharks, out to do us wrong.

The NSA has been sued by Wikimedia (operator of Wikipedia) and others to stop these broad, warrantless searches. They have sued not only on their own behalf, but on behalf of their users as well. This is where libraries and booksellers come in. It is not so much on behalf of themselves as of their patrons that these book people are concerned. Practicality and privacy issues may make it imprudent for their patrons' to assert their rights, leaving it to those who serve them to defend their privacy.

The government defense is based on two arguments. The first is totally disingenuous. The NSA argues that Wikimedia can't sue because they haven't established that any of their communications or visits have been monitored by authorities. Nevermind that it has been revealed, and the government has even admitted, that they intercept an enormous volume of internet traffic and Wikipedia is a highly used website. Even with their admission, no one, no matter how high its traffic volume, can prove that any of its particular communications have been intercepted. Now, the NSA has not done the obvious and deny that Wikimedia communications have been intercepted. No, the government has simply attempted to set up a defense where, despite our knowing that huge amounts of information have been intercepted, no one can challenge its legality because no one in particular can prove that they were targeted. Even if illegal, no one would ever have the legal standing to challenge the government's behavior.

The government's second defense, and the one challenged by the book people, contests the right of parties like Wikimedia, or booksellers, or libraries, to assert the privacy rights of their patrons. This is the battle they have fought for years over physical books. The NSA maintains that Wikimedia does not have an interest in whatever privacy concerns they imagine their clients may have to challenge the interception of their communications in court. This claim has resulted in five book related organizations joining the battle, submitting what is known as an amicus curiae brief to the court on behalf of Wikimedia (this is a legal brief submitting additional arguments on behalf of the supported party). Those organizations are the American Library Association, American Booksellers Association, Association of Research Libraries, Freedom to Read Foundation, and the International Federation of Library Associations and Institutions.

The book groups point out that suspicion and embarrassment put a damper on freedom of speech (and information) if government is allowed to snoop on our reading habits. Will people even dare to read about terrorist groups to learn about them if they think the government is watching? What if officials think their desire to learn is a sign of support? Or how does it affect your freedom to read something controversial or potentially embarrassing if you think big brother is watching? Here's a two-word very current description of this issue – Ashley Madison.

In their legal filing, the book organizations ("amici" or friends) note, "Included in the 'millions of innocent people' swept within the government’s upstream surveillance are libraries, booksellers, and their patrons as they communicate online. Those interactions—the same ones that amici have historically gone to great lengths to protect in the physical world—are unceremoniously and systematically searched as they pass through government surveillance devices. These searches are 'almost certain' to deter the environment of 'uninhibited, robust, and wide-open' inquiry that amici work tirelessly to foster. Upstream thus violates the First Amendment 'right to be free from state inquiry into the contents of [one’s] library,' a right which amici would have standing to vindicate." "Upstream" refers to the manner in which communications are intercepted.

We will resist the temptation to pontificate. The library and bookseller groups have long honed in on this key issue of free speech, free communications, freedom from government intrusion in our lives. It is a fundamental value of most people who love books and freedom of information. Still, it would be unfair not to recognize the government's concerns. The threats we face today are new and real. Freedom from violence is important too.

However, it is not necessary to address those issues today as this lawsuit is focused on a procedural issue – who has "standing" to seek redress from government interference in a courtroom? According to the NSA's argument, essentially no one has. Libraries and booksellers may not, in their opinion, defend their patrons, even where practical concerns make it next to impossible for their patrons to defend themselves. Additionally, since no one can prove beyond a doubt that they were spied upon, though we know millions were, the NSA would effectively bar anyone from challenging their right to collect private electronic communications. Citizens have a right to have access to a courtroom. Let the courts decide as they may which communications are privileged, but at least give people the right to be heard. The libraries and booksellers must prevail in their demand to at least be heard by an impartial court if we are to have anything more than a police state.